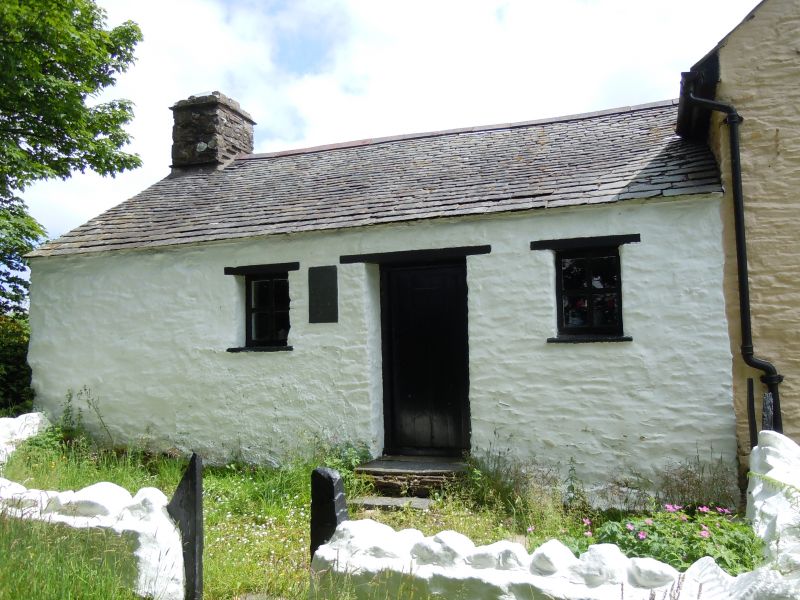 Location: Situated NE of Cynwyl Elfed at a junction of minor roads some 2.5km N of Blaen-y-coed.

House, Rhydfelen, and attached cottage, Y Gangell, mid C19, not marked on 1840 Tithe Map but marked as Rhydfelen on 1887 OS. The cottage, Y Gangell, was the birthplace of the preacher, hymn-writer and poet, the Rev Howell Lewis, known as Elfed, 1860-1953. Lewis' parents moved here in 1859 and the family moved on some four or five years later. They were members of Blaenycoed chapel. Lewis was minister for sixty years at various places, finally Tabernacle Welsh Congregational Chapel, Kings Cross, London. He was a major figure in the religious and cultural life of Wales over many years. He won bardic crowns at the National Eisteddfods of 1887 and 1891 and the chair in 1894, and was Archdruid 1923-7. The house, Rhydfelen, and the cottage were bought as a memorial to Lewis in 1957, opened in 1964. Rhydfelen was renovated as a caretaker's house, renovated again in late C20, while the cottage was kept as it was, but with repairs including a new fireplace beam.

House and cottage, whitewashed rubble stone with slate roofs and stone chimneys. L-plan, the house to front, the cottage as rear wing. The house has a square stone chimney to left, chimney removed to right. C20 fenestration, stained wood sashes. Possibly originally a lofted cottage without upper windows. Ground floor offset to right has six-pane sash each side of door, the right sash broader than the left, the C20 door in narrowed opening, all openings with stone voussoirs. To left is a narrow small sash lighting fireplace end. First floor has 6-pane sash under eaves over window left of door, possibly inserted. and over door is a C20 catslide dormer with broad low 6-pane sash. Left end wall has small light to ground floor left. Right end wall has window each floor, large loft window, small light to ground floor right. Rear has narrow long 6-pane stair light left of centre, under eaves.

Cottage has entrance passage with facing door to kitchen. Kitchen has door to parlour on right and fireplace with beam to left end. The beam was replaced during C20 repairs. Boarded ceiling above oak joists.

Listed as an interesting vernacular group of small house and cottage retaining traditional character. The cottage Y Gangell, is a well preserved example of a type now rare in this region, and for historical association with the hymnodist and poet Elfed.