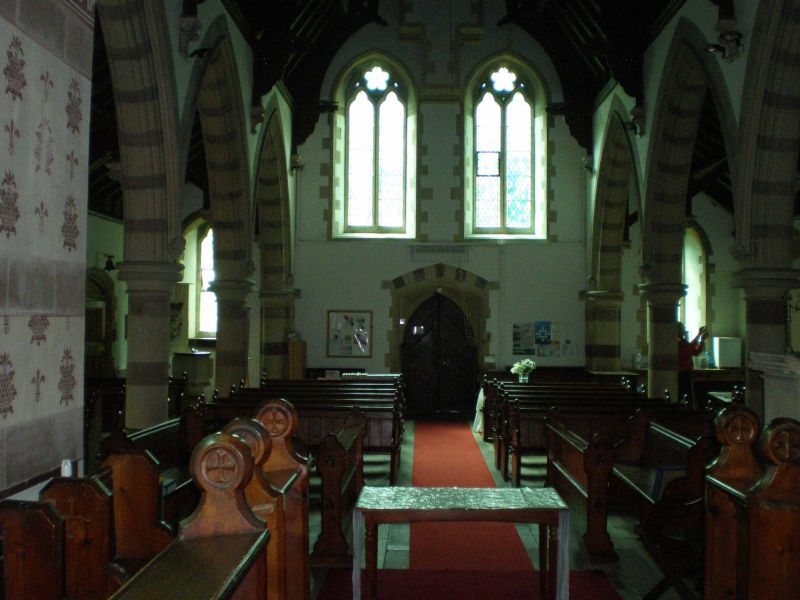 Location: Set between the main road and river Wye on E side of Tintern Parva.

The church is first mentioned in c1348 but the present church was so heavily rebuilt in 1846 that it is difficult to date. The medieval fabric survives to some considerable degree, as a comparison with pictures of the church previous to 1846 show, and the south porch seems to be late C15. The present church, however, appears to extend a bay further west than its predecessor, although there is no trace of this in the stonework. The church has remained largely unchanged since 1846. The parish of Tintern Parva was amalgamated with Chapel Hill in 1902 and has been the sole Tintern church since the closure of St Mary's in 1972.

The west gable end has buttresses either side, a pointed door, a window with two trefoil headed lights grouped under a quatrefoil and a trefoil headed lancet in the gable. The gable carries a gabled bell-cote and a single bell dated 1867, this is topped by a cross. The south wall of the nave has buttresses either end with the projecting south porch towards the centre. This has a pointed arch leading to a rib vaulted porch and the inner doorway is also medieval. To the right of the porch is a Victorian window with two trefoil headed lights with a quatrefoil above, and to the right of this a cinquefoil light with a dripmould over to light the pulpit. Coped gables. The north wall of the nave is in three bays separated by buttresses, from the left a 2-light window with trefoil heads which is reasonably medieval, then a 2-light and a single light Victorian one. The chancel south wall has a blocked pointed arch priest's door and a 2-light medieval window as before. The east gable has buttresses and a stepped window of three trefoil headed lights, also a trefoil in the gable, all Victorian. Coped gable. The north wall is covered by the Victorian vestry which has a door and a reset medieval window.

The church is surrounded by a churchyard with a variety of C19 memorials including some chest tombs. There is a memorial to John Loraine Baldwin, died 1896, the founder of the I Zingari Cricket Club, who lived at St Anne's House (qv).

The furnishings are all Victorian and plain except for the medieval font bowl. Tiled floor in the chancel. The roofs are arch braced collar beam trusses with close boarding. The trusses are close set in the nave and in three wider bays in the chancel. Both date from 1846 but reuse some of the medieval rafters and bracing.

Included as a medieval church restored in 1846 which has been little changed since that date.