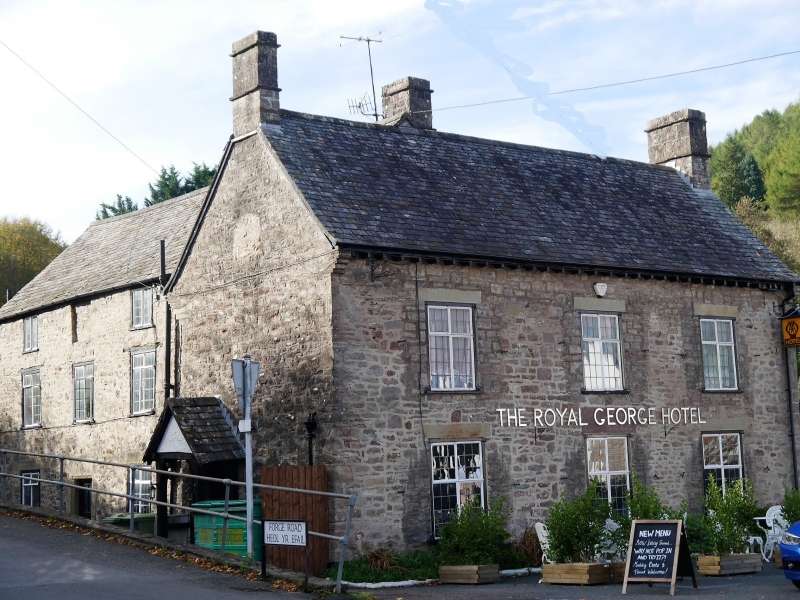 Location: At Tintern Cross, the junction of the A466 and the road to Devauden.

This building originates apparently in 1598 which date was once on the lintel of the rear wing. If this part is the original house it looks as if it was altered at a later date, but the doorway could be 1598. The house is then supposed to have been rebuilt and enlarged in 1704 by Richard White, the owner of the Old Wire Works, as his own house, he lived there until 1752. It was later lived in by another important manager of the Old Wire Works, Robert Thompson, who died in 1820. The opening of the Wye Valley turnpike in 1829 greatly increased the number of visitors to Tintern and this house which stands right beside the new road, was converted to a hotel in 1835 and has been a key presence in the Tintern tourist industry ever since. Its appearance in the late C19 is recorded in photographs, but its present appearance dates only from c1930 when the building was greatly changed and enlarged. The main buildings have altered little since then apart from minor refenestration, but there are extensive additions to the rear and in the gardens which date from the late C20.

The buildings are constructed of random limestone rubble with the front range roughly coursed, both ranges have been rendered in the past, and both are roofed with Westmorland greenslates. The front range is of two storeys and attic and is three windows wide; cross-framed lattice casements with louvred shutters under concrete lintels. Steeply pitched roof with gable stacks and a ridge stack in the cross-passage position. The appearance of the building is an apparently balanced C18 one but a comparison with its appearance in c1920 shows the changes. In c1920 it had its Georgian appearance of 1835 when it became a hotel, but the sash windows were unevenly arranged and the entrance was in the cross-passage position, so the basic building probably even predated 1704 (see History). The post 1930 and still current appearance has heightened eaves, a raised roofline and uniformly arranged windows. The entrance was moved to the right hand return where a characteristic 1930's wing was added, probably as a tearoom, with continuous glazing on the ground floor, with small paned windows, and a large swept roof with three gabled dormers which have 6 6 casements. This is attached to a rear wing added to the main block, which has two windows, and the entrance to the hotel is canted in the angle between them. The wing is to the full height of the front ridge and is therefore of the same building programme. The end of the tearoom has a verandah and another gabled dormer in the roof.
The rear elevation shows a gabled dormer in the tearoom roof and three windows in the gable of the rear wing, but this is mostly obscured by later building. The old rear wing is a balanced three storey house which could be of 1598. Central door with dressed jambs and lintel, c1930 casements with concrete lintels flanking this, three more above under stone lintels, and two smaller casements above this with a blind recessed panel in the centre. Rear stack and tall attached 1930's chimney. The gable end is largely reconstructed and has three modern casements. The rear elevation is hidden by later buildings.

The interior is very considerably changed and is largely of the1930's and the late C20. Only the ground floor was seen at resurvey. The tearoom is now a large bar area.

Included as an early hotel developed from a late C16 and an early C18 house into one of the early tourist hotels in the Wye valley, which became an important tourist destination in the late C18.