A Grade I Listed Building in Chepstow, Monmouthshire 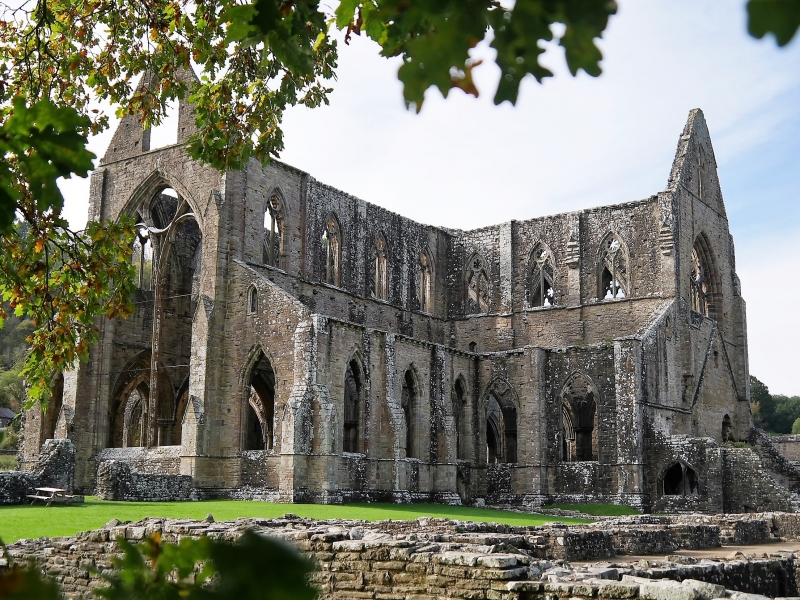 Location: In a prominent position on the right bank of the river Wye on the east side of the A466.

Tintern Abbey was founded on 9th May 1131 by Walter fitz Richard of Clare, Lord of Chepstow, and it was the first Cistercian house in Wales. It was staffed from the Abbey de l'Aumone near Chartres, a daughter house of Citeaux. It quickly grew in size and wealth with the gifts of estates in the locality, and by 1291 was farming more than 3000 acres (1215 hectares) and was the fifth richest house in Wales. In 1302 it was given rich lands in Norfolk by Roger Bigod, Earl of Norfolk, and this led to the zenith of its wealth enabling the Abbey to complete the building of the new church which had been begun in about 1269. Decline set in with the Black Death in 1348-9, and with Welsh unrest, culminating in the uprising of Owain Glyndwr in the early C15 when much damage was done. As numbers fell, so the ability of the Abbey to run its estates properly declined. It was actually dissolved as a minor house in 1536 ie. one with fewer than twelve brothers and with an income of less than £200, although both these were untrue. It closed on 8th September 1536 and was passed by the Crown to Henry Somerset, Earl of Worcester, the Lord of Chepstow and Raglan.
The Abbey and its estates continued in the ownership of the Earls of Worcester, later becoming the Dukes of Beaufort, until 1901, when the Abbey was purchased by the Crown for preservation for the sum of £15,000. The church had been mostly roofless since the C16 and was heavily mantled in ivy, although still in surprisingly good condition and very much the same as when the Buck brothers had recorded it in 1732, the earliest known depiction of the Abbey. The rest of the conventual buildings had, since the C16, suffered a variety of fates, conversion to houses or industrial use, or pulled down for the use of the stone elsewhere, but the church was to some degree protected by the Beauforts, with Charles, the 4th Duke, instigating some repairs and tidying it up as a tourist attraction in c1750. It became a major tourist attraction with the interest in 'sublime' scenery engendered by Rev William Gilpin following his visit in 1770, and the publication of his book 'Observations on the River Wye' in 1782, and which also encouraged people to visit the nearby Piercefield Park and the Wyndcliffe (qv St. Arvans Community). The closing of the Continent to English travellers during the Napoleonic Wars could only encourage this interest, as did the artistic contributions of Wordsworth and Turner in the same period. This was followed by the opening of the Wye Valley turnpike in 1829 which runs actually through the Abbey precinct, and finally the opening of the Wye Valley Railway in 1876, making Tintern Abbey into the major international tourist attraction that it then became and has since remained.
Meanwhile, following purchase by the Crown in 1901 an extensive programme of restoration and recording under the aegis of F W Waller and Sir Harold Brakspear began and was continued until 1928. This included the removal of all the ivy and the rebuilding of the south nave arcade. Responsibiility for the building passed to the Office of Works in 1914, later the Ministry of Public Buildings and Works; then in 1971 to the Department of the Environment and finally in 1984 to Cadw, Welsh Historic Monuments.

The buildings are described in the same order as in the Cadw guidebook, which should be referred to for a fuller account.

The Church is unroofed except for the south nave aisle and the porch, but it is otherwise remarkably complete, especially in comparison with other Cistercian abbeys; the only major sections missing being the north nave arcade and the vaults. It is constructed throughout of local red Devonian sandstone, both rubble and fine ashlar, which was quarried locally; while the roofs, which are C20, are of stone slates. The building was commenced in c1269 to the south of the existing Romanesque church, the first Mass at the High Altar was heard in 1288 and the church was completed in c1320 at about 72m in length. It has the standard cruciform plan with a 6-bay nave, a 4-bay choir, a 2-bay south transept and a 3-bay north one. The larger crossing piers could have supported a lantern of some kind. The style is Early English, transitional to a full blown Decorated, which is demonstrated in the west front and the surprisingly well preserved window tracery. Examples of all the window types survive and the only major loss is the great window of the south transept which was presumably similar to the smaller one which survives in the north transept. The building is of the highest quality of design and construction throughout.

The Cloister survives as an open courtyard with the exposed foundations of what was once a very elaborate arcade of late C13 date.

The East Range, containing the Chapter House, Parlour and Monks' Day Room with the Monks' Dormitory above and dates from the C12 and C13. The ground floor rooms survive in a reasonably explicable condition.

The North Range with the Warming House and the Refectory are mid C13. The surviving windows of the Refectory show it to have been a fine room.

The West Range, which was the Lay Brothers' Refectory and Dormitory, dates from the mid C13 and has a partial survival of the lower storey.

The Porch, which dates from the late C13 survives largely complete and roofed, leading to the also C13 Outer Parlour which is still fully recognisable.

The Infirmary Hall which is principally late C13 survives only as foundations and its complete appearance is conjectural.

The Abbot's Lodgings, which began in the C13 and was greatly enlarged in the C14, has enough of the decorative stonework surviving to show that it became a very fine medieval house.

The current open appearance of the interior of the church is misleading as it was divided by a number of solid stone screens in the medieval period and the elaborate Decorated pulpitum of c1320 was only finally removed in c1880. All the rubble stonework now revealed would have been plastered over, the floor was paved with tiles and there would have been elaborately vaulted ceilings to all the spaces.

Included and highly graded as an exceptionally fine and well preserved ruin of a late C13 Abbey church and its conventual buildings, which became famous for their beauty and interest in the C18 and were a key factor in the development of 'Picturesque' tourism.
Scheduled Ancient Monument Mm 102 (MON)G