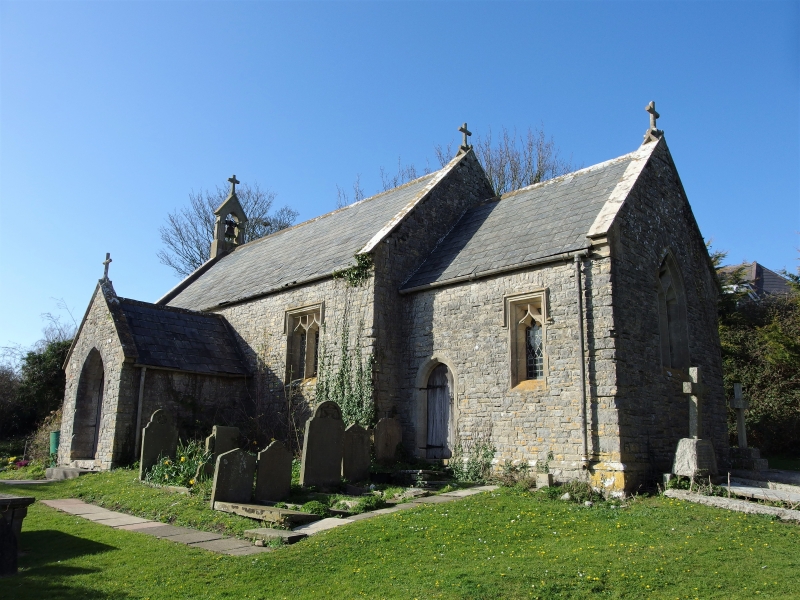 Location: In small walled churchyard with stone stile at end of Fort Road, above cliffs of Lavernock Point.

Parish church with medieval, possibly C12, origins. From C12 the Black Canons established their influence along both shores of the Bristol Channel; St Augustine's, Bristol held the Manor of Penarth, with the first church at Penarth probably built between 1186 and 1191 when William Saltmarsh was Bishop of Llandaff, Prior of Bristol and Lord of the Manor of Penarth. Lavernock, associated with the Norman manor of Cosmeston, is believed to have always been a Chapel of Penarth, though in C16 there was a specific link with Cogan. Churchyard has early C19 tombstones. Extensive restoration of 1852 refaced the building and replaced windows and roofs. Disfiguring strap pointing has been added at NW. The churchyard wall has a plaque recording the historic radio message in 1897 by Guglielmo Marconi and George Kemp, between Flatholm and Lavernock Point.

Interior is mostly rendered with some areas of exposed stone, floor of mostly unglazed tiles. C19 roofs, 4 bays, arch-braced truses with exposed rafters to nave. Narrow pointed chancel arch, chamfered and stopped at base and with a raised impost band. Narrow chancel arch (Newman believes may reflect a C12 origin).