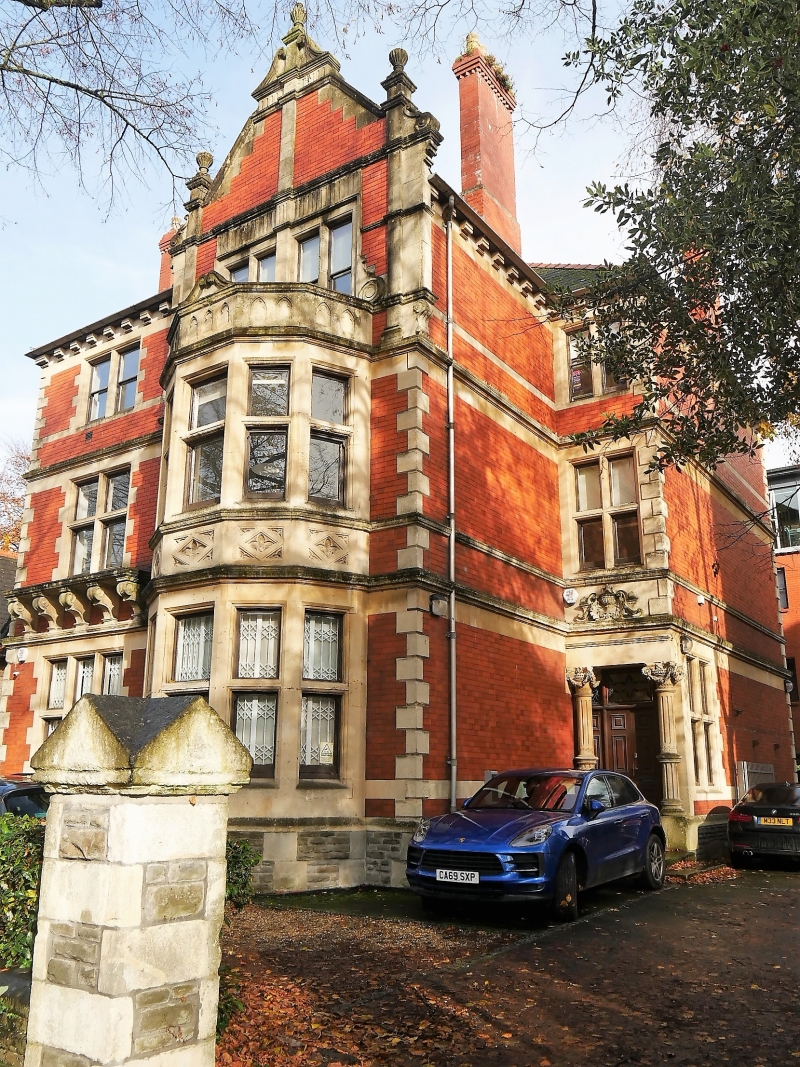 Location: Part of the group of fine Victorian houses at the south end of Cathedral Road.

Part of the late C19 development of Cathedral Road by the Bute Estate, building houses for the new class of successful businessmen in Cardiff. This is one of the earlier houses built c1880. It is shown on the O.S. Glamorgan Sheet XLIII surveyed 1875-81. The development followed on from the opening of Sophia Gardens to the public in 1858 but took some time to come to fruition. The Bute estate proposed that the 'west will be skirted by a long line of beautiful villa residencies which are to be erected between the gardens and a new road intended to be formed and called the Cathedral Road'. (Daunton). These villas were intended to have private rear entrances to the Gardens. Of these villas only Nos 20 and 22 survive little altered.

Large detached three storey villa built in red brick with Bath stone quoins and dressings and having a Welsh slate roof. Jacobethan style. Three bay front to the street, 2 1, the right hand bay is recessed and has the entrance. The left hand bay has a 3-light window on the ground floor, mullion-and-transom, with similar 2-light ones above. The main bay is set slightly forward and has a 5-light canted bay on the first two floors with moulded panel between and balcony balustrade above. The second floor has a 4 light window with king mullion and plate glass sashes. Decorated gable above with ball finials to the kneelers and apex. The entrance bay has an elaborate recessed porch with columns and a 2-light mullion-and-transom window above and a 2-light window above that. Bands at the different floor and cill levels, modillion eaves cornice, tall brick stacks. The right hand elevation is blind except for the 2-light mullion-and-transom window to the hall. The left hand elevation has plain single and 2-light windows. Rear elevation not seen but the house has been extended with a large modern office block attached at the rear.

Not available for inspection at time of resurvey, but it has been converted to office use.

Included as part of a special group of late Victorian houses together with the former synagogue. They are perhaps the best example of their type remaining in Cardiff.