A Grade I Listed Building in Wiston, Pembrokeshire 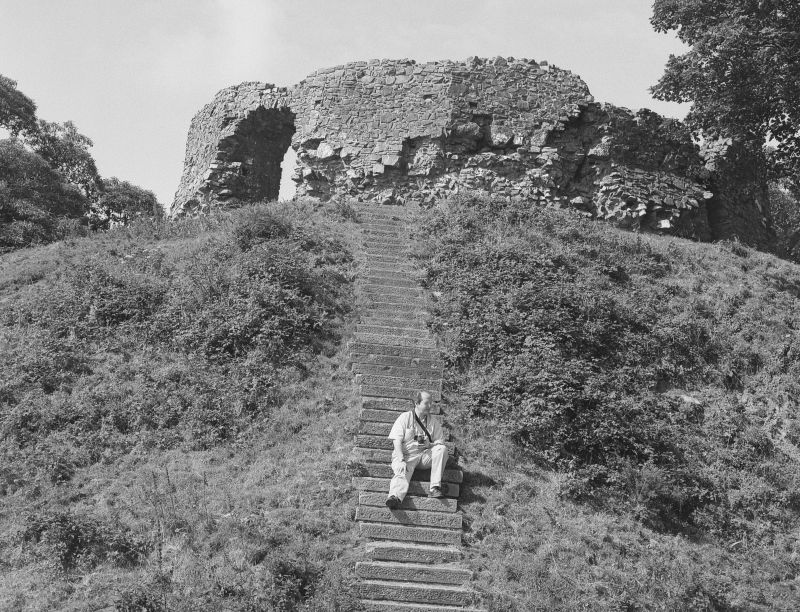 Location: In a prominent position near the centre of Wiston some 200m N of the Church of Saint Mary.

Stone castle of c. 1200 built on earlier large earth motte, set within Iron Age enclosure. The castle was probably first built before 1112 as a defended motte by Wizo the Fleming who died before 1130. Captured by Welsh forces led by the sons of Gruffydd ap Rhys ap Tewdwr and Hywel ab Owain Gwynedd in alliance with the Norman lord WilliamfitzGerald in 1147. In 1193 Wizo's grandson, Philip de Gwys and his sons were captured by Hywel Sais, son of the Lord Rhys, and in 1220 the castle was destroyed and the borough burnt by Llywelyn the Great. The de Gwys heiress married Gwgan, the first of the Wogans of Wiston, who held the manor until 1794.
It is uncertain whether the castle was rebuilt after 1220, though the local people were told to help William Marshal, Earl of Pembroke to do so, the last mention of the castle is in 1231. The stone shell keep may date from after 1195 or possibly after 1220. It remains one of the best examples of a shell keep in Wales. It stands in a large oval bailey with a well-preserved bank that crosses the ditch to abut the mound on W and E. Ditches survive on the NW and NE sides. Entrance on the E with outer earthwork. Used in the Civil War as a Royalist outpost in 1643, abandoned after the Royalist defeat nearby at Colby Moor in 1644.
Wiston is remarkable as having been set up before 1112 as a borough, part of the colonisation promoted by Henry I. The borough, although wholly vanished by the C16, retained mayor and burgesses and the right to vote in elections until the reforms of the early C19.

Ruins of a shell keep on a 9-metre high earth motte surrounded by a ditch. Motte has added flight of some 50 steps up to the rubble stone circular shell keep on the 18-metre diameter platform. The encircling wall is destroyed to the N, circular within but 16 or 18-sided polygon on the outside. Walls sloped outward. Damaged arched S entry with stone voussoirs and draw-bar holes. The wall varies from 1.5 to 2 metres and from 3 to 4 metres height, originally higher. Stone steps within the entry to right.