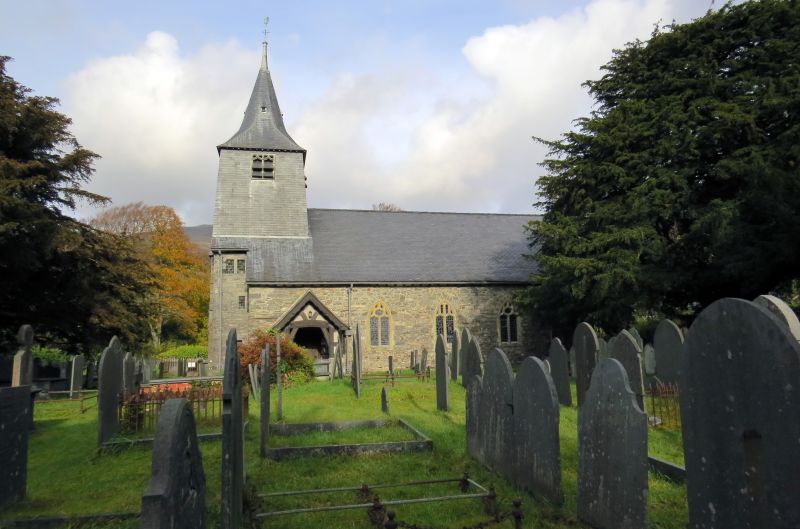 Location: Set back from the W side of Bull Street (A496) in the centre of the village of Maentwrog. Entry to the church grounds is via the lychgate between Neuadd Llewelyn and Pen-y-Bryn.

Late C19 church, built in a Decorated style, to the plans of Douglas and Fordham Architects, of Chester, in 1896, under the patronage of the Tan-y-bwlch estate; the plans are on display inside the church. The original Medieval church was rebuilt in 1814 and the nave of the present building is built on the foundations of the earlier church 'with the addition of chancel, tower and spire': as recorded in the inscription over the S porch. The church is dedicated to St. Twrog and also to St. Mary, giving a connection with the Cisterian monks of the area.
Outside the W end of the church is a sandstone pillar with rounded head and corners c.1.2m tall - known as Maen Twrog and legend has it that Twrog threw the stone down from the top of the Moelwyn, crushing a pagan altar in the valley. Also features in the 4th branch of the Mabinogi, where 'Maen Tyriawg, above Y Felenrhyd', was the burial place of Pryderi, slain by Gwydion.

Late C19 parish church comprising 4-bay nave clasping a west tower, with narrower chancel, SW porch and NE outshut housing the entrance to the vestry. Built of rubble masonry with sandstone dressings, the porch is half-timbered on a stone plinth base. Slate roof with feathered eaves and stone copings; the belltower and spire have slate hung elevations; the porch has advanced verges with shaped bargeboards.
The nave is of 4-bays, each with a Perpendicular, pointed arched window of 2-lights. The E and W windows are similarly detailed windows of 3-lights with cusped tracery; the W window recessed under a double arch flanked by raking buttresses. The chancel has single ogee headed lights in a pointed arched frame and the W tower has rectangular leaded lights lighting the staircase up to the belltower; plain doorway with chamfered jambs below.
The half timbered porch has curving angle braces to a carved head to the outer doorway which bears the inscription: IN : DOMINO : CONFIDO. The door jambs have moulded angles and the timberwork is pegged. The inner doorway has a datestone above the head which bears the inscription: THE NAVE OF THIS CHURCH WAS / REBUILT ON OLD FOUNDATIONS / WITH THE ADDITION OF CHANCEL / TOWER AND SPIRE · AD · 1896 ·

The church has an exposed roof of arched braced trusses with moulded braces and posts above the collars. The nave is of 3 roof bays, the chancel 2 and there are side aisles separated from the nave by timber piers with arch braced angle struts. Above the side aisles there are painted plaster panels, with timber dividers, each of which bears decorative motifs; those along the nave have decorative floriate motifs with cusped ogee headed surround, the chancel panels bear depictions of the 10 commandments.
The chancel is raised by a single step and has the organ room to R (S), with pulpit at the NW corner; and vestry to L. The woodwork at the E end of the church is particular fine, the loft room and vestry have Tudor arch headed doorways to the centre of the W walls which have ogee headed panels under billeted coping. The angles have ornately carved pillars and the side walls have shaped balusters with ornate floriate pierced carving between.
The sanctuary is raised by a further 2 steps and has a brass rail on twisted stanchions with floriate brackets. The reredos has finely carved panels that depict scenes from the Incarnation, The Worship of the Shepherds and The Adoration of the Magi and the words: THY WILL BE DONE in fine mosaic. There is a reading desk at the R side of the sanctuary which has an ornately carved and pierced pelmet to L of which is an ogee headed recess. The pulpit has carved panels including one that bears a depiction of St. Twrog and the choir stalls have carved ends. On the left wall there are a pair of recessed slate panels, within a shaped surround, (reset from the earlier church) that bear shields of arms and the inscriptions: HIC·IACET·THOMAS / LLOYD·LLANDEKWYN / ET·ELIZABETH·VXOR / EIVS·1703 (on the left hand panel) and HIC·IACET·IONETA·RELICT / EVAN·EVANS·OF TAN Y BWLCH / A·M·FILIAET·IAM·IOHANNIS / VAUGHAN·DE·CEFNBODIG / ARM: / SEPULTA·FUIT·MO·DIE / OCTOBRIS·AD·1703 (on the right hand).
Other memorials of note are along the N wall of nave and chancel and include a shaped stone tablet with floriate surround, surmounted by an urn and with cherub heads and wings below, to Anne, daughter of Evan Evans of Tanybwlch and wife of Thomas Meyrick of Berthlwyd Esq. d.1743; ornate marble memorial surmounted by urn and obelisk to Robert Gruffydd, Tanybwlch, Eldest and only surviving son of Evan by Jonett, eldest daughter and co heir of Thomas Meyrick d.1750; bronze tablet to Thomas Meyrick d.1766 and bronze tablet to Robert Gruffydd of Plas Tanybwlch d.1770. All reset from the earlier church. Other memorials and the glass belong to late C19 and C20.

Listed as a fine late C19 church in a Decorated style with good interior enrichment. The church reflects the patronage of the Tan-y-bwlch estate and is an integral component of the estate village of Maentwrog.