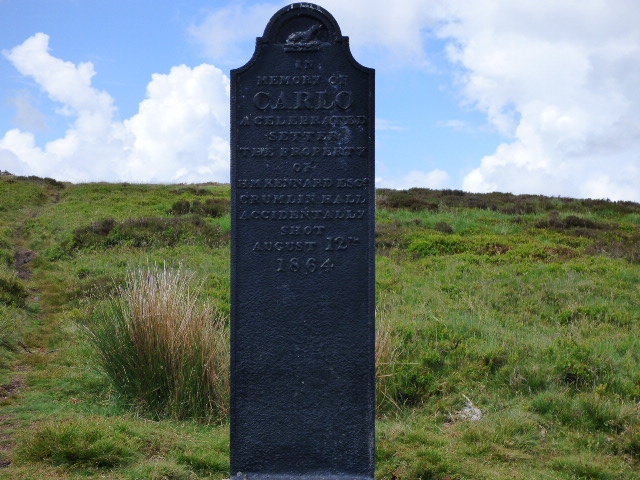 Location: High up on Mynydd Varteg Fawr, 200m SE from the summit and just to the S of a large mound of stones.

Erected to the memory of Carlo, a setter owned by Henry Martyn Kennard of Crumlin Hall. The Kennard family were prominent in the running of the Blaenavon Company during the mid C19. H M Kennard was its director, 1858-72, and served as High Sheriff of Monmouthshire in 1863. Carlo was accidentally killed during a shooting party organised by the Blaenavon Company on the 'Glorious Twelfth' of 1864. Kennard ordered that his dog be buried where he was shot and then arranged for the memorial to be cast, presumably in the Blaenavon Ironworks, and erected over the grave.

Memorial, cast iron on concrete plinth. Tall single iron sheet with raised edge and ogee top, base and reinforcing rib on its rear side. At the very top the figure of a resting dog with raised snout is set within a small recess, below is the inscription 'In memory of CARLO, a celebrated setter, the property of H M Kennard Esq, Crumlin Hall, accidentally shot August 12th 1864'.

Included for its special architectural and historic interest as a good unusual example of a cast iron memorial slab displaying clear craftmanship, and having a considerable connection to regional social and economic history. It indirectly reflects the importance of the iron industry and the Kennard family in the history of Blaenavon, a town at the forefront of the industrial revolution.