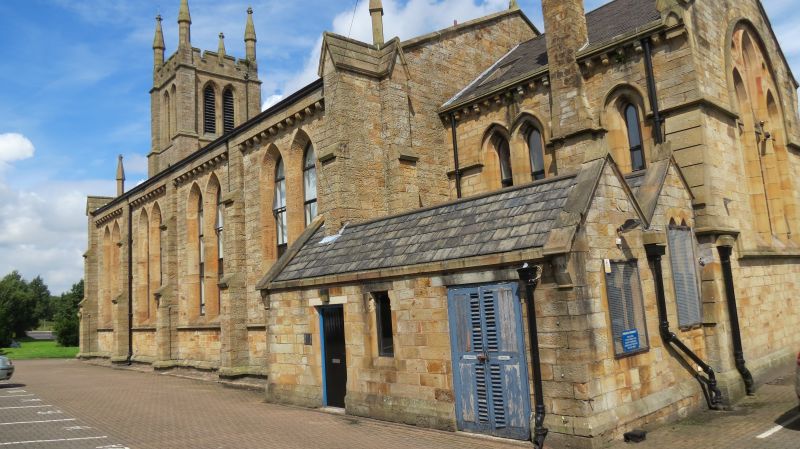 Church. 1835-6. By Lewis Vulliamy for the Church
Commissioners; enlarged in later C19; derelict in 1991
following fire damage; restored and converted into flats in
1993. Punch-dressed sandstone ashlar, slate roof (now with
skylight windows). Early English style. Nave with west tower,
chancel with north chapel and south vestry.
EXTERIOR: the 3-stage tower, with clasping buttresses,
offset-bands between the stages, and an embattled parapet with
octagonal corner pinnacles, has paired 2-centred arched west
doorways in a 2-centred blank arch, a clock-face at the 2nd
stage with a diamond-shaped surround, and coupled lancet
belfry windows with louvres. The wide unaisled 4-bay nave has
a chamfered plinth, angle buttresses with tall pinnacles
rising from the angles, simple buttresses between the bays
with 2 offsets, a corbel-table to each bay, and tall coupled
lancet windows with deep splayed reveals (now with only the
remains of stained glass). The chancel, of 2 short bays, has
coupled lancets in the sides and an east window of 3 stepped
lancet lights in a 2-centred blank arch; and on the north side
a gabled chapel with a circular window (tracery destroyed).
INTERIOR remodelled, but formerly had 3-sided gallery on
cast-iron columns, and an open-timbered roof.