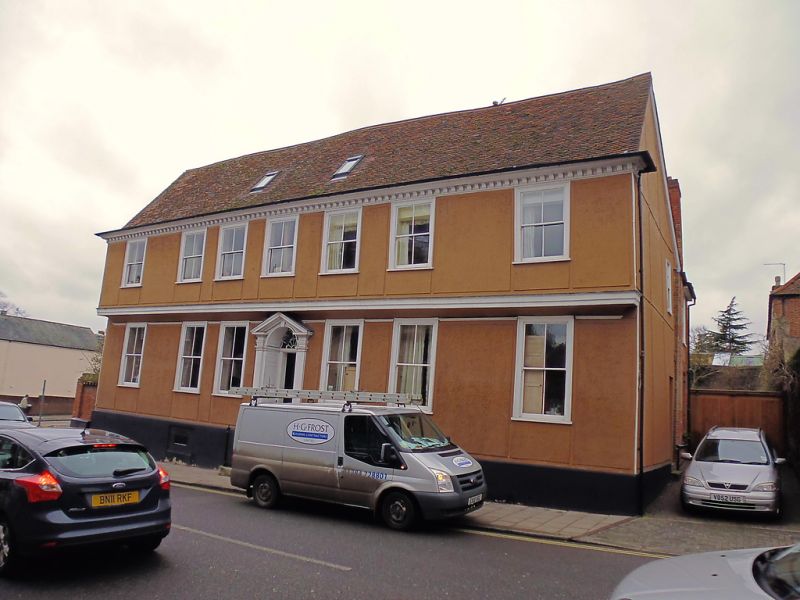 House. c1500. Timber-framed and jettied, part originally with
brick nogging, now all rendered in panels. The ends of the
jetty are covered by a moulded fascia. Plaintiled roof.
EXTERIOR: 2 storeys, cellar to part, attics. A range of 7
irregularly spaced sash windows with a single vertical
glazing-bar to lights in flush cased frames. A central 6-panel
entrance door, up 6 steps with cast-iron wreathed handrails,
has an Adam style fanlight with radiating glazing bars and is
recessed in a wood doorcase with panelled reveals and
pilasters and an open dentilled cornice. A 16-pane sash window
in a flush cased frame in the apex of the south gable.
A brick extension at the rear partly replaces a C19 brick
range. The jetty was underbuilt in the C18 and the house now
has a double front wall with a gap between the 2 into which
panelled frames and inside shutters for the sash windows were
fitted.
Part of the original front wall on the south side can be seen
from inside the house: the brackets supporting the jetty had
carved capitals and shafts down the front of the posts. On the
upper storey a new jetty was added, again with the intention
of making space for the inserted sash windows.
INTERIOR: cellar below south end has an original ceiling with
plain joists and heavy main beam. Walls with niches and a wide
retaining arch in the inner wall. A C19 brick addition has
numbered wine bins. The timber frame is in 2 distinct halves,
quite close in date; on the south, 2 bays, including the
entry, divided into 2 rooms, both with double ogee moulding to
the main ceiling beams and joists.
The north wall has a 6-panel door in a moulded surround and
exposed studding with the remains of wall painting simulating
wood panelling: the panels are outlined in red and contain
brown roughly drawn wood graining. A rebuilt chimney-stack on
the back wall has stone jambs and a smaller 1st storey
fireplace has stone jambs and a plain cambered timber lintel.
The south upper storey, divided into 2, has the principal room
with exposed studding and traces of wall painting in 3 phases:
on the north wall, similar to the room below; along the south
wall a delicately painted late C17 floral design with vase on
a pink background in one panel and parts of a frieze in grey
and black over a doorway. The ceiling has shallow double roll

mouldings to the cross beams and single roll mouldings to the
joists.
The partition wall between the 2 upper rooms has long tension
braces and the end room has a blocked stair trap. Roof with
side purlins set square and the remains of braces for a
queen-post roof. The queen-posts are missing and there is a
2nd layer of rafters. To the north of the entry are 3 bays of
slightly earlier framing which formed a single large room on
each storey. Exposed ground storey ceilings have heavy
chamfered cross-beams with cut-off stops and plain unchamfered
joists. Studding along the front wall has the remains of brick
nogging.
A chimney-stack on the rear wall with a plain timber lintel.
On the upper storey the walls have long arched braces halved
against the studs and arched braces (some removed) to the
tie-beams. The tie-beam of the open truss has a peg-hole and
mortice for a missing crown-post. The much-repaired roof has 3
layers of rafters.
(BOE: Pevsner N: Radcliffe E: Suffolk: London: 1974-: 153).