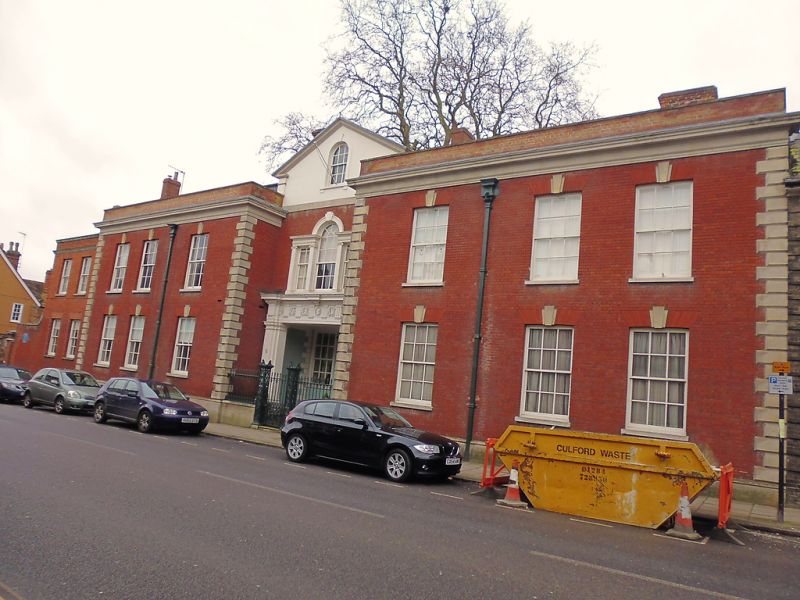 House. C16 and early C18. Encased in red brick, laid in
English Bond with stone rusticated quoins. Timber-framed core;
slate roof, of mansard form following C18 alterations.
EXTERIOR: the front facing Northgate Street has 2 balanced
2-storey wings with a 3-storey recessed and gabled centre
which contains the entrance. This centre has a fine
stone-dressed small-paned Venetian window with Ionic pilasters
to the 1st storey and a central round-headed window on stub
brackets to the 2nd storey: a 12-pane sash in a plain
architrave with a keystone. A stone band runs between the 1st
and 2nd storeys.
A central 6-panel door with stone pilasters and cornice has a
12-pane sash window with heavy ovolo-moulded glazing bars and
moulded sills to each side. The door and windows are recessed
in a deep entrance porch with clustered pilasters, a triglyph
frieze with enriched metopes and a cornice which breaks
forward centrally and above the side pilasters. The doorway is
approached by a flight of steps and is protected by a good C18
iron ornamental gate; gateposts and railings on low side
walls.
The side wings have brick parapets, stone cornices, chamfered
stone quoins and moulded stone plinths. Each wing has a 3
12-pane sash windows in plain reveals with gauged brick arches
and stone keystones.
A later 2-storey extension at the south end has a brick
parapet with moulded stone cornice and two 12-pane sash
windows in plain reveals to each storey. An imposing west
frontage faces the garden: 2 storeys with a brick parapet and
stone band and a moulded stone plinth. 11 window range,
arranged 4:3:4, with the centre breaking forward slightly:
12-pane sashes in flush cased frames with segmental gauged
brick arches; ornate keystones to the 4 outer windows on each
side.
The centre rises to 3 storeys with a moulded brick open
pediment on short pilasters above a moulded brick cornice. The
2nd storey has a central round headed window. An original lead
water-head is dated 1713.
INTERIOR: very extensive cellars with original worn stone
steps: front walls apparently of painted clunch; several stone

cross walls and much stone in the outer walling; vaulted brick
ceilings; various niches.
The interior has many fine early C18 fittings. The large
panelled entrance hall has raised fielded panels and dado
which also surround an inner porch with a 6-panel door and
decorated cornice. Floor paved with limestone flags. A
fireplace in white figured marble has a Baroque eared
architrave with egg-and-dart and bay leaf ornament.
The main geometric stair and balustrade have unusually complex
balusters which combine vase-on-reel and barley-sugar twist
ornament. Moulded ramped and wreathed handrail; open bracketed
strings. The balusters on the back stairs, which rise to the
attics, have a simpler vase-on-reel form. To the left of the
entry, the former kitchen has one bay of an exposed timber
ceiling with plain closely-set joists and evidence of an
underbuilt jetty.
A small back room has one wall with reset Jacobean panelling.
To the right of the entry, a small panelled ante-room with a
carved architrave to a corner fireplace, and beyond it a large
room with dado and ornate eared architrave with egg-and-dart
ornament and a central festoon to the fireplace.
A main ceiling beam exposed during repairs has a C16 double
ogee moulding and was formerly jettied. The large rear room
has Edwardian remodelling with a heavily moulded ceiling in
Jacobean style. Fully panelled rooms on the 1st storey also,
several with good original fireplaces and 2 with panelled and
pilastered surrounds: the most ornate has reeded Corinthian
pilasters.
The roof over the north end of the house has 3 C17 parallel
gabled ranges and a rear range at right-angles to them, all
with clasped purlins, but concealed beneath the present
mansard roof. The roof over the south end is much altered and
repaired. Surviving Victorian fittings in the house include a
complete row of bells in the service corridor.
(BOE: Pevsner N: Radcliffe E: Suffolk: London: 1974-: 103).