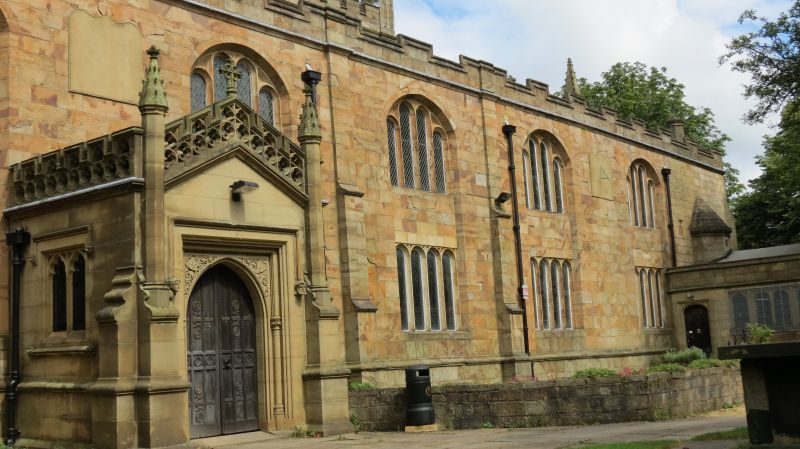 Parish church. C15 west tower (raised 1802), nave and north
aisle rebuilt c1532, south aisle rebuilt in 1789-91 and north
aisle again rebuilt in 1802 (both with galleries); nave raised
1854-6; sanctuary enlarged 1872-3; south porch added 1889;
south-east vestry added and galleries removed 1903; major
structural repairs in progress at time of survey 1991.
Sandstone ashlar, slate roofs. Perpendicular style.
EXTERIOR: the west tower, of 4 unequal stages with a massive
moulded plinth, angle-buttresses to half-height, a drip-band
over the 3rd stage, a set-back 4th stage with a corbel table,
plain cornice and embattled parapet with intermediate and
corner pinnacles, and an elaborate weather vane, has: a
2-centred arched west doorway with hollow-moulded surround,
hood-mould with figured stops (worn) and double doors with
scrolled strap hinges; a restored 3-light west window with
cusped lights, Perpendicular tracery and a hood-mould; a
similar but smaller 2-light window to the 3rd stage; clock
faces in the top stage with small 2-centred arched one-light
belfry windows above; and at the south-east corner a narrow
rectangular vice (or stair-turret) which has small chamfered
loop-lights.
The narrow 5-bay nave (of the same width as the tower) has a
clerestory of square-headed 4-light Tudor-style mullioned
windows and an embattled parapet with large crocketed corner
pinnacles. Both aisles extend eastwards alongside the chancel
but are of unequal width and length, the narrower north aisle
having a westward extension embracing the tower, but they are
in matching style with 2-storeyed chamfered Tudor arches
containing 4-light mullioned windows on both floors, those at
1st floor arched, and all with uncusped round-headed lights
and hollow spandrels; the south aisle has pilaster-buttresses,
a gabled Gothic porch to the 2nd bay and over this a large
ogee-headed stone plaque with the date "1799[?]" inscribed
above it, and between the 4th and 5th bays a large wall
sundial inscribed "This Dial was constructed by / Mr Whyman of
Gawthorpe / in the year 1791"; the buttressed north aisle has
in the 2nd bay an ogee-headed doorway with plain surround, and
its westward extension has a 4-light window at 1st floor only.
The chancel has a large 2-centred arched 5-light east window
with Perpendicular tracery.

INTERIOR: inaccessible because of repair work in progress.
(Bennett W: The History of Burnley: Burnley: 1946-1951).