Banqueting House with added gatehouse and other extensions 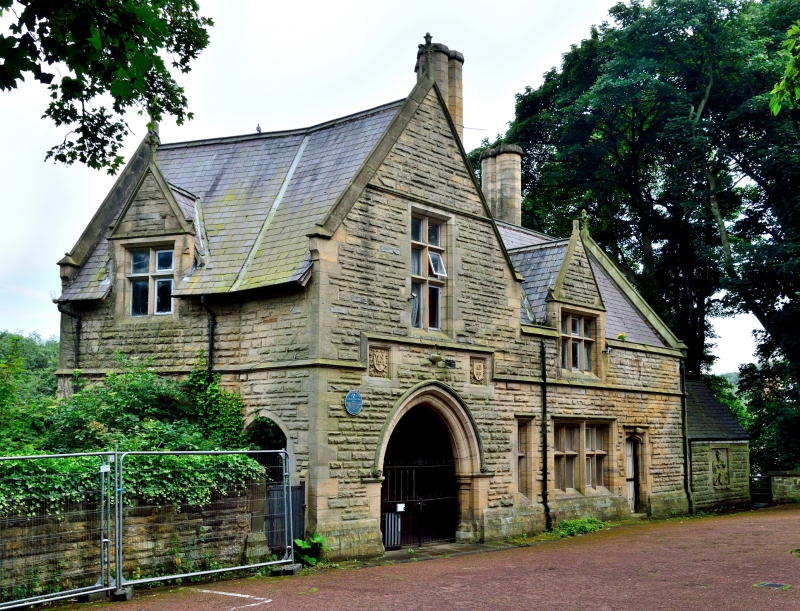 Entry Name: Banqueting House with added gatehouse and other extensions

Banqueting House 1860-62 to the designs of John Dobson for Sir William (later Lord) Armstrong, extended to provide a gatehouse, reception hall and display room in 1869/70 by Richard Norman Shaw.

The asset was previously listed twice also under List entry 1186745. This entry was removed from the List on 1st October 2015.

Banqueting House 1860-62 to the designs of John Dobson for Sir William (later Lord) Armstrong, extended to provide a gatehouse, reception hall and display room in 1869/70 by Richard Norman Shaw.

PLAN: the group is build up against the steep west slope of Jesmond Dene, the upper part (gatehouse) sits at the top of the slope facing Jesmond Dene Road and to the rear the complex staircase descends the steep slope, with the banqueting hall, display room, reception hall and vestibule set on level ground at the bottom. The banqueting hall has a cruciform plan and is oriented north to south. The gatehouse, stair well, reception hall and display room are oriented west to east with an irregular plan.

EXTERIOR: the original 1860 banqueting hall is a tall, roofless, Italianate building with the wall-tops shaped and capped. The long east elevation has seven bays with three tall round-arched window openings at each end; the central bay projects and is taller and wider than the others. Both short sides repeat the wide bay, and has a double door with fanlight and substantial glazing bars between Tuscan pilasters; side lights are set in a high rusticated round-arch, with a quoined roundel above. Window and door joinery to all openings is original. The elevations of the 1869/70 extension, which climbs the steep slope to the west are largely obscured; the exception is a four bay two-storey flat-roofed range attached to the west of the south gable. There are four blocked, full height, segmental ground-floor windows to the ground floor and four first-floor windows with a central mullion in the form of a columns with foliated capitals.

The 1869/70 gatehouse sits at the top of the steep bank and has two storeys and four bays in Tudor/Gothic style. The dwelling to the right has a ledge boarded door with elaborate hinges under a Tudor arch with a stone mullioned and transomed window to the left, and a central gabled half dormer. The gabled bay to the left has a wide two-centred-arched porch with head-stopped drip mould; above are carved panels bearing shields reading WGA to the left and 1870 to the right, and there is a tall mullioned and transomed window to the first floor. The steeply pitched roof has roll-moulded coping and finials and tall, paired octagonal chimneys. The left return has a narrow pointed-arched entrance into the porch with a large round-arched opening to the left and a cross window within a gabled half dormer above.

INTERIOR: The long, west elevation of the banqueting hall (now internal to the complex) is blind with three niches either side of a central bay, formerly containing statuary; the projecting bay on this side is enclosed by a full height roofed timber link to the reception hall’s vestibule. The banqueting hall has concrete screed flooring with a geometric tiled border replacing the raised timber floor depicted in a film of the building in the 1950s.

The dwelling element of the gatehouse complex has a partitioned basement, three main rooms to the ground floor and a winder staircase leading to four bedrooms (one partitioned to provide a bathroom). Original features have mostly been removed including fireplaces, joinery, plaster work and the stair balustrade. The porch element to the left has a stone coffered ceiling, and a second two-centred arch leads to the main stair comprising a barrel-vaulted stairwell with four landings and three straight flights (the third set at 90 degrees to the former) descending the slope to the lower rooms. The stairwell has moulded plasterwork, and stone detailing and evidence of an early decorative scheme comprising browns, creams and green is evident. There is a rib-vaulted ceiling to the first landing, this has been removed from the second landing, but both have a round-arched timber window. The third landing has lost most of its original plasterwork, has C20 replica windows and the roof is altered to include a hatch; while the main stair continues down to the fourth landing, a spur of steps lead up to the ‘display room’; this has a modern C20 interior including plasterboard-lined ceiling and walls, but where exposed surfaces are visible original plasterwork is absent. The fourth landing, reached through an arched opening with red-brick detailing, has been divided into two by an inserted wall and partially converted to a store lined with plasterboard. There are original rooms beneath the stairwell (not inspected).

An arched brick opening fitted with modern double doors, leads from the stair into the ‘reception hall’, essentially an ante-room to the main 1870 banqueting hall. It comprises two parts, the reception hall and a narrow vestibule with gallery above. These spaces retain extensive and original plasterwork, joinery and tilework. The reception hall has a full-height sub-cruciform plan, top lit by a glazed roof with a re-set, shallower outer pitched structure replacing the original. The roof retains an original moulded timber barrel vault on an iron frame but has lost original glazing and surrounding plasterwork; a central metal feature is of uncertain function. Each wall of the reception hall also has a moulded plaster architrave of floral bosses, and three walls retain a full height round-headed and moulded arched opening above; that to the east opens onto the gallery, the north and south are deep alcoves, that to the north having a large segmental-arched window, now covered, and both contain light timber modern staging. The west wall has a similar blind opening, thought to have originally housed the large painting Prince Hal.

The ‘vestibule’ set to the east side forms the link between the Dobson and the Shaw phases. It comprises a colonnade of square pillars and pilasters with composite foliated capitals and Greek key below, each face different to the next. It has a keyed blocked stone entrance, to the north end, which formerly led to the service range. The gallery above has a decorative iron balustrade.

This building was constructed in 1860-62 to the designs of John Dobson for Sir William (later Lord) Armstrong as a banqueting house to entertain his distinguished guests. Although Dobson’s original brief was also for the construction of a gatehouse, this was not built. A number of service rooms originally lay to the north and were largely demolished in the later C20. The first event in the hall took place in 1862 for the Elswick Works Literary & Mechanics Institute and other events included those for his employees and business clients. Notable diners included Henry Marc Brunel and Thomas Sopwith.

In 1869-70 the hall was extended by R Norman Shaw; this is the same year that Shaw began work on Armstrong’s county house, Cragside in Northumberland (Grade I). The extension included provision for a gatehouse, a reception hall, an art display room and a water-powered pipe organ on the gallery (removed). It was also designed to house a 14' 6 painting, Prince Hal, by John Calcott Horsley, first intended for The Houses of Parliament but bought by Armstrong, and is thought to have hung in the reception hall, now removed. In 1883 Lord Armstrong donated the banqueting hall and Jesmond Dene (Registered Grade II) in which it sits to Newcastle Corporation for public use and enjoyment, with the banqueting hall specifically to be used for arts, literature or education purposes. It was subsequently used for civic and other banquets, and during the second half of the C20 it was used as a wedding reception venue, and exhibition space. By 1970 the building lay vacant and in 1977 LBC was granted for the removal of the roof from the original hall. It is currently (2014) let as artist's workshops.

The Banqueting House of 1860-62 to the designs of John Dobson for Sir William (later Lord) Armstrong, extended to provide a gatehouse, reception hall and art gallery in 1869/70 by R Norman Shaw is designated for the following principal reasons:
* Architectural: John Dobson's original scheme for his Italianate banqueting hall can still be appreciated and the Richard Norman Shaw additions are a good example of this architects high quality work;
* Intactness: although the original banqueting hall is a roofless shell, the Shaw additions are externally intact and retain extensive elements of their original rich, decorative scheme;
* Planning: the Shaw extensions use the steeply sloped site and change of level to good effect seen particularly in the complex, elaborate layout;
* Historic: the design of the complex by two eminent architects, John Dobson and Richard Norman Shaw, for William Armstrong, one of the most notable arms manufacturer and industrialists of the C19 gives this building complex strong historic interest;
* Group value: conceived as part of Armstrong's scheme for his private pleasure grounds (Jesmond Dene, Registered Grade I), it has clear group value with the surrounding landscape and a number of listed buildings within it.