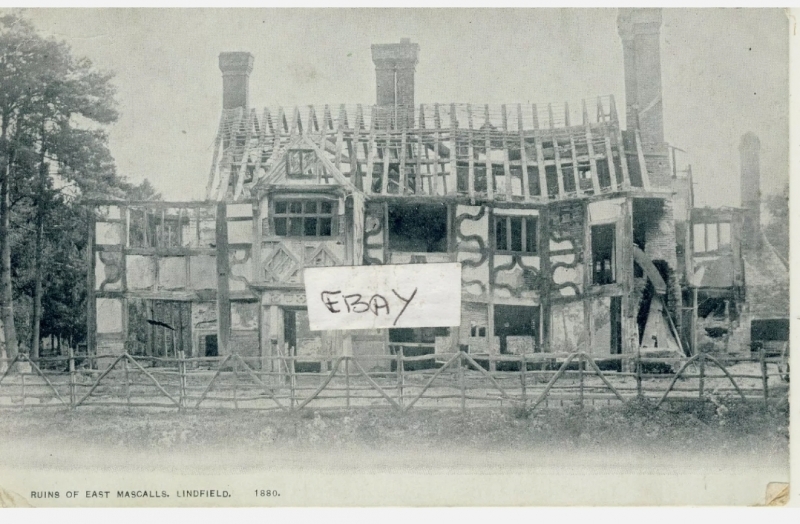 
A timber-framed house with plaster infilling, the first floor having panels of ornamental timbering, built in 1578 and restored and enlarged in the C19.

The original portion is of two storeys and five bays. The projecting porch has a moulded lintel above the arch, oversailing sides on a bressumer and two diamond panels with cartouches featuring the initials of the builder, NN with the date 1578 and the restorer, WS with the date 1896. Above is an original window with wooden mullions and transoms. The overhanging gable has carved bargeboards and pendant and a tiny attic window. The other windows are modern casements. The west front has two gables, restored and tile-hung in 1896. The west wing was rebuilt to the north, in a sympathetic style, in 1937. All is under a Horsham slab roof.

The interior was not inspected.

HISTORY
The original stone house on this site was built for the Mascalls family in the C15. This property passed to Ursula Middleton in 1550 who sold it to William Newton of Southover Priory, Lewes, formerly from Cheshire, whose son, Nicholas re-built an E shaped timber framed property in 1578. The property passed by inheritance into the Noyes' family in 1741 but was a ruin by 1870. It was restored by William Sturdy in 1896. The modern oak framed west wing was added to the north elevation in imitation of the original in 1937 by the then owner AR McNaught.

REASONS FOR DESIGNATION
East Mascalls is designated at Grade II* for the following principal reason:
* Architectural Interest: A good example of a C16 house, with high levels of survival of original fabric.