A Grade I Listed Building in Chichester, West Sussex 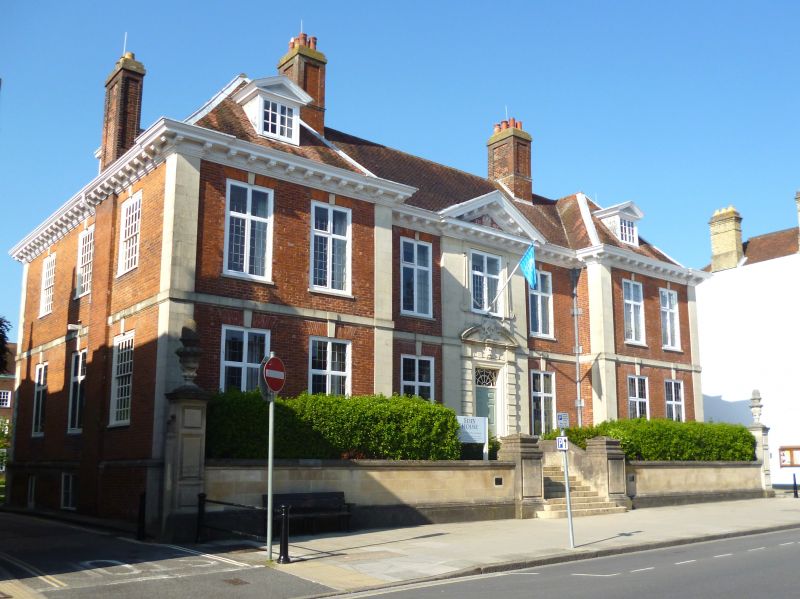 TEST STREET
1.
972 (North Side)
The John Edes House
(formerly Westgate House)
SU 8504 NE 3/136 5.7.5O.
I GV
2.
1696. This house has often been attributed to Wren, but the Victoria County
History and other architectural critics dissent. 2 storeys, attic and basement.
7 windows. Red brick with Portland stone dressings and centre portion. The
shape of the house is a central portion with 2 slightly projecting wings.
String-course above ground floor. Cornice above 1st floor with modillions and
egg and dart moulding below. Tiled hipped roof with lead ridges. 1 dormer in
each wing. Pediment over central portion. Original casement wipdows with
leaded panes and keystones over. Doorway up steps with pilasters of quoins,
flat arch, semi-circular fanlight, broken curved pediment and 6 panel moulded
doors. The approach has been altered in modern times. In the place of a brick
wall some way in front of the house, a low stone wall has been built at the bottom
of the steps which hides the basement windows. The pair of panelled stone piers
supporting pineapples which previously flanked the entrance to the house in the
middle of the brick wall has been moved to the entrance to the County Hall at the
side and a similar pair, copied from them, were at the same time placed each side
of the exit on the other side, but have since been removed. The garden front has
a porch with Ionic columns and a room above, added later. Good panelling inside.