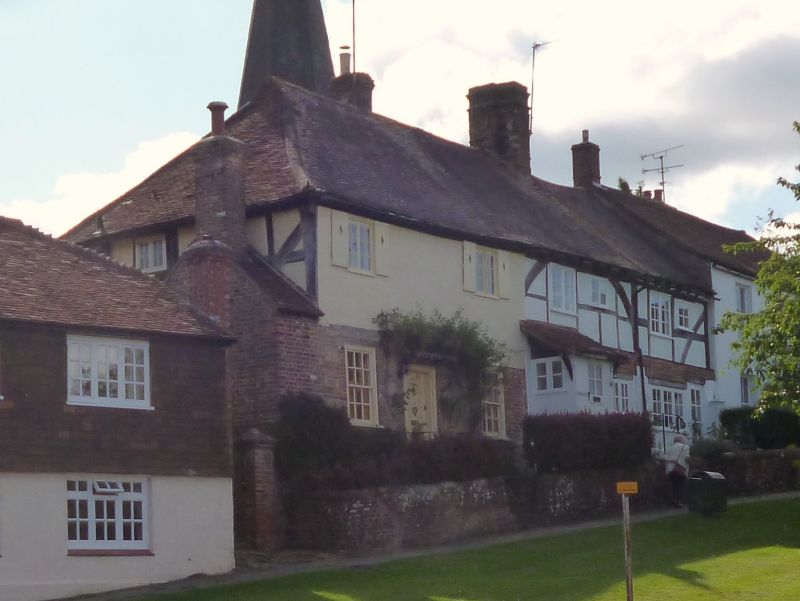 GV
II
House, later three cottages, now subdivided into two properties. Late Medieval Wealden house, possibly dating from the C14, with inserted C16 chimneystack and ceiling into the open hall, adapted into cottages in the C18 and restored and re-fenestrated in the C20.

PLAN: Single bay open hall with cross passage and service end to south and solar to north. The open hall was ceiled over and a chimneystack inserted into its southern end in the C16. In the later C18 the building was subdivided into cottages with later partitions.

EXTERIOR: The west elevation of No. 63 has a rendered first floor and two C20 casement windows with wooden shutters. The ground floor is underbuilt in brick with two C20 12-pane sash windows, a C20 doorcase with flat weatherhood and door with six fielded panels. The west elevation of No. 65 has two exposed timber framed bays with wallplate, the northern displaying the curved braces to the original recessed centre of the open hall, now filled in with thin C18 framing on the first floor and the southern bay displaying a midrail and curved downbrace to the upper floor. There is a section of about six courses of stretcher bond brickwork above the ground floor, which has a deep plinth. There is a C20 penticed tiled porch to the ground floor. The end south wall is now concealed externally by a later building (No. 67). The north wall has exposed framing with cornerposts, the western one jowled, and a curved down brace, although much is concealed behind a large C18 external brick chimneystack with English bond brickwork. The rear elevation has a late C18 lean-to extension.

INTERIOR: The north ground floor room of No. 65 has an inserted C16 ceiling with one inch chamfers. There is a roll-moulded dais beam in the north wall where it abuts No. 63, which may date from the C14 and although the wall below is plastered it is reported that original panelling survives underneath. There is an open fireplace with wooden bressumer, and unusually, there is another dais beam at the south end of the north room. The south room also has an open fireplace with wooden bressumer, the original medieval ceiling beams and some studs to the south wall are visible. On the first floor the north end wall of the hall has a curved down brace, corner posts and wall plate visible, the wallplate and studs to the east wall and there is a smoke-blackened tie beam. The roof structure of No. 65 has a square crownpost with head and foot braces and smoke-blackened rafters. A section of wattle and daub adjoining the crownpost has combed pargetting. An C18 lath and plaster partition separates Nos. 63 and 65. No. 63 was not inspected internally.

REASONS FOR DESIGNATION: No. 63 Causeway Cottage and No. 65 Tithe Cottage, High Street, Billingshurst are designated at Grade II for the following principal reasons:
* A late medieval former Wealden house retaining much of the original timber frame, crownpost roof with smoke-blackened rafters and, unusually, two dais beams.
* It has group value with St Mary's Church and other listed buildings in the High Street.