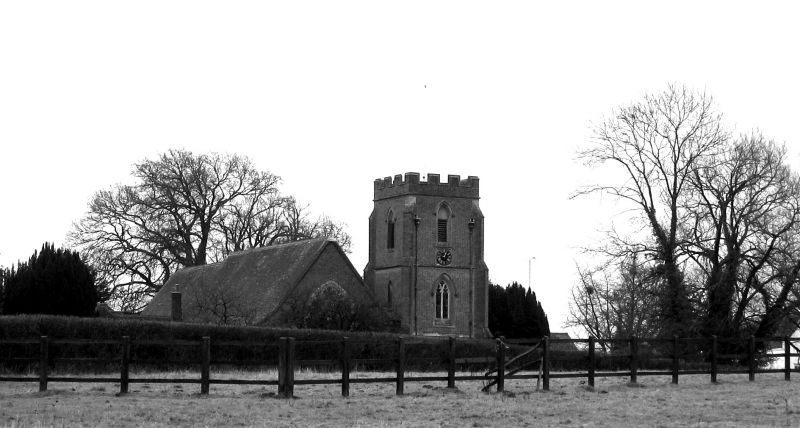 Church. Rebuilt using old materials after a fire in 1680 on south side, tower
of 1838 by Robert Ebbels, chancel,nave and north aisle of 1874 by Ewan Christian.
South wall and porch of C17 brown brick; tower red and blue brick with stone
quoins to south side on stone plinth, red and blue brick in diaper pattern and
banding courses to nave, chancel and north aisle; plain tiled roofs with ridge
cresting. Aisled nave with tower to west and porch on south. Chancel to east
with chapel to south and vestry to north. Tower square with diagonal offset
buttresses; 3 stages with battlemented parapet. Stone surrounds to louvred
arched openings in top stage with clock below in apron panel to west face. Two
light trefoil head windows to first stage, one on south face blocked. Two
reused stone C15 & C16 windows to south aisle, one 2-light window in Decorated
style, one 3-light window in Perpendicular style. Remainder of windows late C19.
Ribbed and studded door in moulded wood frame under gauged brick head in south
porch. Arched double doors to west.