A Grade I Listed Building in Chediston, Suffolk 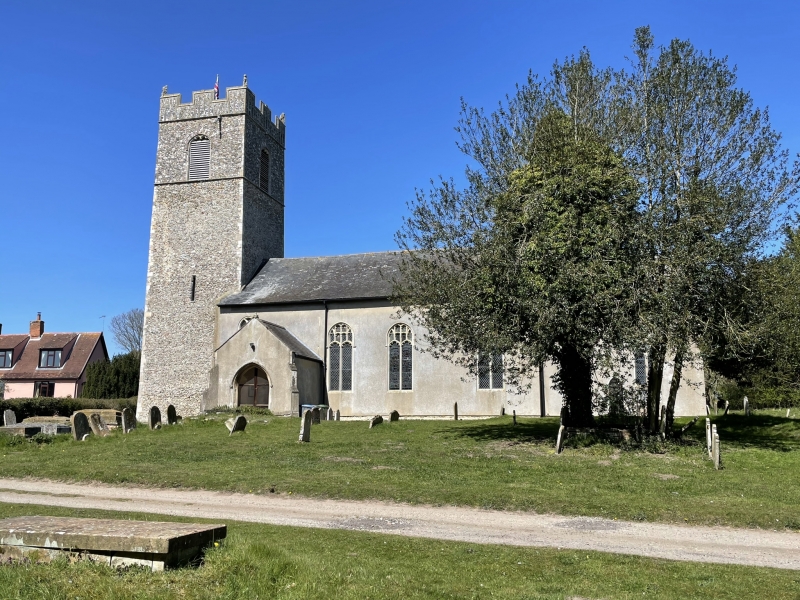 Parish church. Medieval. Nave, chancel, west tower, south porch, north
vestry; an C18 family pew on the north side of the nave has been demolished.
Flint and stone rubble, all but the tower cement-rendered; stone dressings;
slated roofs. Square unbuttressed tower: the lower section is probably C13
and has a 2-light west window with Y tracery, lancet windows to the west,
north and south and, high up, evidence for larger blocked openings; C15 bell-
chamber stage with crenellated parapet enriched with flushwork panels. Late
C13/early C14 core to nave: both the south nave and porch have similar moulded
doorways of this date. Stoup to right of nave doorway. The nave has
Perpendicular-style windows, 3 of 2 lights to the south, 2 of 3 lights to the
north. At the west end of the south nave is a high level window probably to
light a former gallery. Blocked north nave doorway. The south chancel has
one C19 trefoil-headed lancet window, a Priest's doorway and one broader
lancet window with Y tracery; to the north is a C13 lancet window, now within
the vestry. C19 3-light east window. Fine C15 8-bay arched-braced nave roof
with crenellated wallplate and traceried cornice; 3-bay arched-braced chancel
roof. C15 carved octagonal font. Much restored angle piscina and drop-seat
sedilia in south sanctuary. Good pulpit dated 1637, originally at Cookley
church. Early C17 altar rails with pendants and obelisks between widely-
spaced turned balusters. High up in the north nave is part of a wall painting
showing the head of St. Christopher. 3 simple C15 poppyhead benches in nave.
Graded I for medieval fabric.