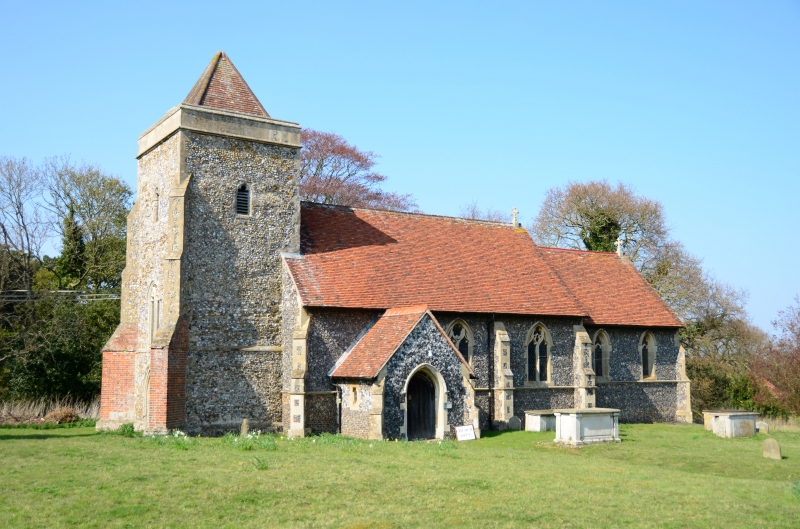 BOYTON (Off) THE STREET
TM 34 NE
(North Side)
7/33 Church of St Andrew
16/3/66
G.V. II
Church. Late C14 or early C15 tower, nave and chancel of 1869 by William
Smith. Flint rubble and knapped flint with ashlar dressings and a plain
tile roof. West tower, nave, chancel, south western porch and north
eastern vestry. Tower: rubble walling with occasional blocks of freestone.
West face: diagonal buttresses rebuilt to their lower bodies in brick and
dying back into the corners via 3 offsets. Central doorway having hollow-
chamfered ashlar surround with hood mould, now blocked with C18 or Cl9
English bond brick. String course below the level of the first stage
window which is of 2 Decorated lights with cinquefoil heads and dagger at
apex of mostly C19 date. Cusped lancet to the belfry with louvres set in
square ashlar surround. String course below the level of the parapet which
is of ashlar blocks of C18 or Cl9 date and has a moulded coping. South
face: similar save for the absence of the doorway and first stage window.
The nave abuts at extreme right. North face: similar to the south face
save that the belfry lancet is slightly to right of centre and at left is
the projecting staircase turret which has a lean-to roof. East face:
abutts the nave and has no openings. Gargoyle to right of centre and below
the level of the upper string course. Nave: completely faced in knapped
flint, as is the chancel. South face: gabled porch at left with diagonal
buttresses. Central door surround mostly of C19 date but apparently
incorporating portions of an earlier, medieval doorway. Hollow chamfer and
double-ogee mouldings and hood mould. Central rectangular windows to the
sides of the porch. To right of this are 2 curvilinear windows with cusped
heads of 2 lights divided by a buttress with 2 offsets. Similar buttress
to far right. North face: two similar windows with different patterns of
curvilinear tracery, divided by a buttress, similar to that on the south
face. To the left is the projecting gabled vestry with a 2-light Decorated
window beneath the gable which has a chimney to its summit. Single cusped
lights to the right flank with chamfered ashlar surround. The left flank
has a reset Romanesque doorway with inner arch and 2 outer relieving
arches. The two outer arches have nook shafts to their corners which
continue across the arch as a continuous large-scale angle-bead. Chevron
patterns to the outer face and intrados and the sides and jambs of the
outer arch. The two inner arches have chevron patterning turned outwards
forming angled peaks and troughs. The innermost arch also has ball
decoration to the voussoirs. To the far left hand corner of the nave is a
portion of ashlar walling with a Romanesque nook shaft. Chancel: lower
ridge and reduced width. South face: 2 windows with hollow chamfers and
cusping to apex. North face: 2 similar windows. East face: diagonal
buttresses dying into the corners via 2 offsets. The string course is
raised to the centre to meet the sill of the central 3-light window which
has Decorated C19 tracery of cusped ogee heads with 3 encircled trefoils to
the apex.