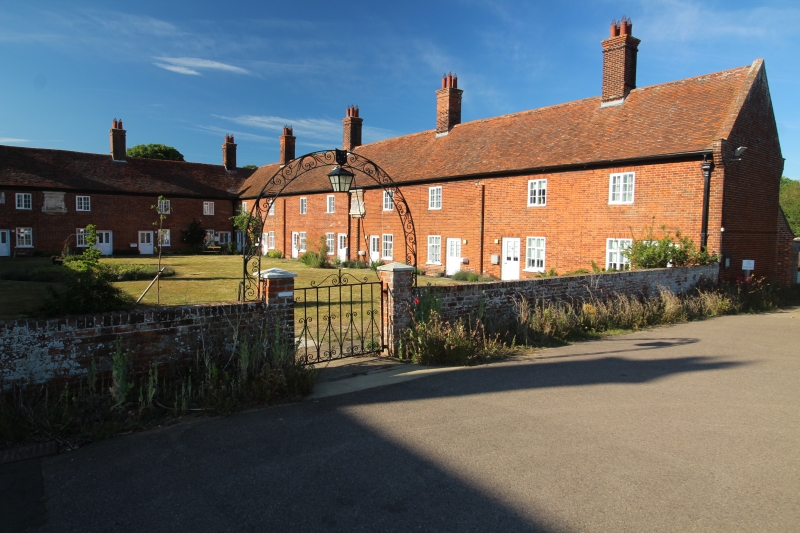 BOYTON (Off) THE STREET
TM 34 NE
(North Side)
7/34 Mary Warner
16/3/66 Almshouses and walled
garden (formerly
listed as Warner's
Almshouses)
G.V. II
Group of Almshouses. Central range of 1743. Left-hand wing of 1828 and
right hand wing of 1860. Red Flemish bond brick with plain tile roofs.
three ranges forming an open rectangular courtyard with a low wall to the
fourth side. South-facing range of 1743: 6 house fronts, each of one bay.
Doorways at far left and right and 2 pairs of doors to right and left of
centre. Flat-arched heads to all the openings. Doors of c.1860 each
having 4 panels, the upper 2 glazed. Six windows to ground and first
floors, each having cross windows of C19 date with glazing bars. To left
of centre at first floor level is a sundial with rectangular ashlar plate
and copper gnomon. To the centre at first floor level is an ashlar
datestone with moulded entablature and sill supported on console brackets.
This reads, to the cornice:
WARNERS ALMSHOUSE
and to the tablet:
TRUSTEES
THE RIGHT HONBLE LORD
VISCOUNT HEREFORD
SIR JOHN BARKER BART.
DUDLY NORTH )
EDMUND TYRELL ) Efqre
JOHN REVETT )
THE REVD MR BENCE
THE REVD MR WELTON
and to the apron:
ERECTED 1743
cavetto-moulded plaster frieze above this and 4 chimney stacks evenly
spaced along the ridge each having 4 flues. The range of 1828 is similar
but has eight houses divided into pairs by pilaster buttresses which die
back by an offset immediately below the cornice. At first floor level,
above the central buttress which dies back at a lower level than those to
either side of it, is a datestone, similar in form to that on the front of
1743 but reading:
To the cornice: WARNERS ALMSHOUSE

Apart from these details the front is similar to that of 1743. The range
of 1860 is an exact copy of that of 1828. Similar datestone but here
reading:
To the cornice: WARNERS ALMSHOUSE

Each of the lateral wings terminates in a blank gabled wall with kneelers.
The brickwork to the gables is layed in a pattern of diagonally ascending
headers and stretchers creating a chevron pattern. Outshuts to the rear of
the ranges, those to the 1743 and 1828 ranges, having two gabled
projections each which rise to first floor level and have loft doors.
Flush with the gable ends of the lateral wings and continuing around the
rear of the 3 ranges is a walled garden enclosure of c.1869 with walls of
c.5 feet in height.