A Grade I Listed Building in Sapiston, Suffolk 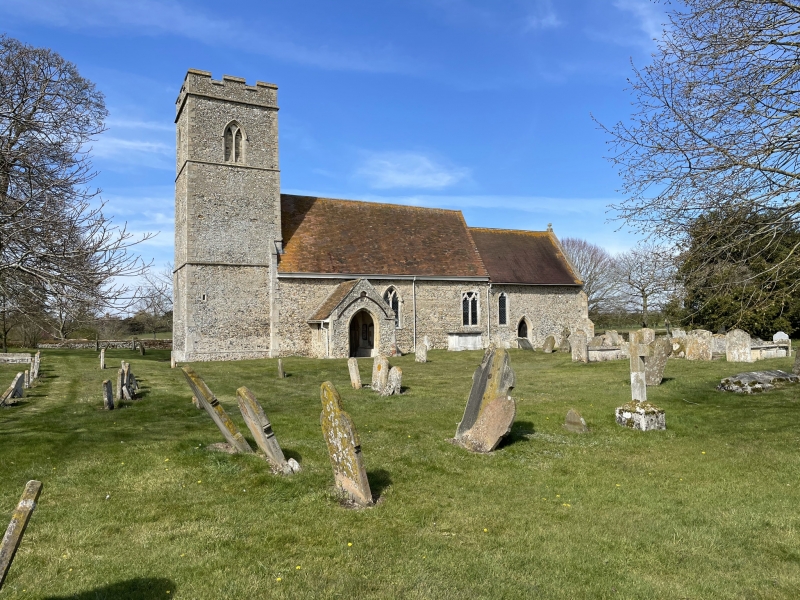 Redundant parish church. C12, with later medieval work. Nave, chancel, west
tower and south porch, built in rubble flint, coursed along lower part of nave
walls, some ragstone, traces of external plaster. Steeply-pitched plaintiled
roofs. Plain tower in 3 stages, without butresses: internal stair, string
courses, embattled parapet, 2-light windows with Y-tracery. 4 bells remain in
the belfry, dismounted, 3 dated respectively 1591, 1608, and 1730. C15 south
porch with plain doorway and 2 2-light windows with cusped heads. On floor, 2
medieval coffin-lids reused as paving. Norman south doorway with plain inner
arch, 2 orders of columns, cushion caps, and formalised acanthus-leaf
decoration on both arches, a very unusual motif in Suffolk. There is a scratch
dial on each of the outer columns. The nave walls appear to have been
heightened. On south side of nave 2 2-light windows with cusped Y-tracery, and
another 2-light window with flat Tudor arch. Inside, remains of Easter
Sepulchre against north wall, with traces of wall-painting above. Plain
octagonal font with damaged Jacobean cover. Blocked north doorway. Roof,
uncovered 1982, of simple rafter type, with scissor-bracing halved across the
collars. This was covered during the C19 with barrel vaulting and 3 false
hammerbeam trusses. Benches around the nave walls include 2 small ones with
low seats, apparently for children. Floor paved with white gault floor bricks,
laid in rows diagonally. 2 black ledger slabs, one much damaged. The chancel
has a 3-light east window with reticulated tracery and remains of medieval
glass. Piscina with restored cusped ogee head and tiny matching side opening.
Small pointed doorway with hood-mould. Blocked south window. Roof still
covered.