A Grade I Listed Building in Honington, Suffolk 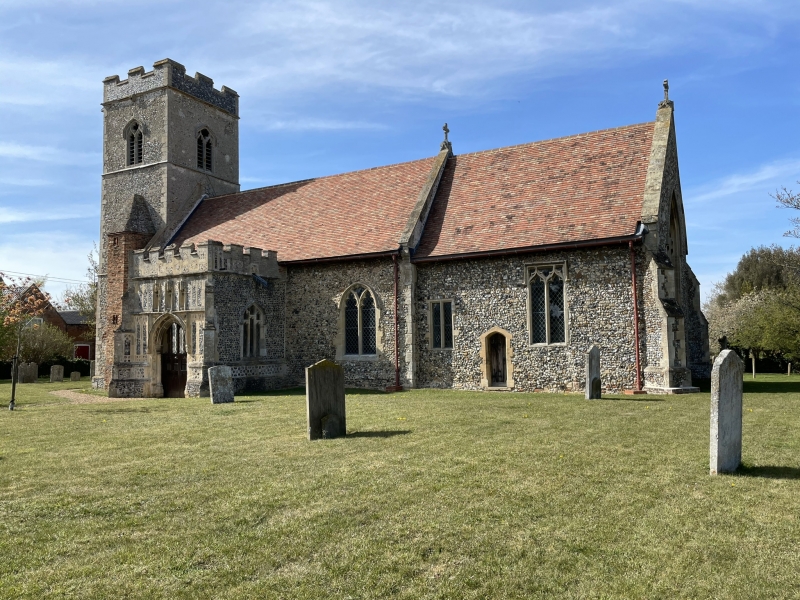 Parish church. Nave, chancel, south porch and west tower in flint with an
admixture of ragstone: freestone dressings. Remains of coursing in the nave
walls, particularly on the north side. Chancel refaced in C19 with large
knapped flints mixed with rubble stone. Plaintiled roofs: 2 small C19 stove
chimneys protrude from the southern slope. A cross on the eastern gable of
both nave and chancel. Porch C15, in black knapped flint, with a base of
flushwork panels. On its south face, squared black knapped flints are set into
traceried flushwork panels. Stone-faced diagonal buttresses: high embattled
parapet decorated with flushwork panels bearing various motifs. 3 empty
canopied niches in a row over C19 restored doorway. Open timber roof:
miniature king posts, moulded rafters. Norman south doorway with 2 orders of
shafts, the 2 outer shafts with zig-zag decoration, that on the right also with
3 intervening decorated bands. Scalloped capitals, and 3 enriched orders to
arch, with base for statue above. On inner side of each door jamb, a small
square recess for a cross-bar. The nave has diagonal buttresses at east and
west. The line of an earlier, higher roof can be seen on the east face of the
tower. 2-light windows with cusped Y-tracery on south side. On south side of
the chancel, 2 2-light windows: one rectangular, the other with ogee-headed
lights in a rectangular frame. Between them, a plain C19 restored priest's
door. 2 diagonal buttresses in kidney flint and freestone have been added to
the east end of the chancel, probably when the large C19 east window was
inserted, and a small vestry is built against the north wall. The church was
extensively restored in 1863 (per White's Directory of Suffolk, 1874), when
both nave and chancel roofs were replaced, as well as the pulpit, lectern and
benches. A very fine octagonal C14 font has delicate traceried panels around
shaft and bowl, and a Crucifixion on the 8th side. Low, renewed base. Plain
narrow Norman chancel arch: imposts on nook shafts. On its north side a wide,
shallow recess, possibly for a side altar. In north wall of nave a tall narrow
empty niche, and a cut-away recess for the former rood loft stairs. On the
south side of chancel, a C14 piscina with cusped ogee head. To the left of the
priest's door, the brass of George Duke, 1594. To the right of the door, the
deep sill and surround of the window have traces of colour and patterns. On
the north side, a square recess, and 2 fine monuments: one to Robert Rushbrook,
1753, the other to 2 of his daughters. Late C17 communion rails with twisted
balusters. 4 C15 benches, with poppy-heads and animals on the ends, reused as
choir stalls. Tower, C14, small, square and unbuttressed, in 3 stages, with a
plain embattled parapet faced in black knapped flint. A stair turret in Tudor
red. brick is built out on the south side: 2 paired slit windows, conical roof.
Renewed west window: traces of an earlier window above with triangular head
outlined in red bricks. Quatrefoil window on west in second stage, and a 2-
light window in Decorated style on each face of the top stage. Restored tower
arch. C16 studded plank door to stair turret. Original late C15/early C16
bell-frame in heavy timberwork with arched intersecting braces. 3 bells.