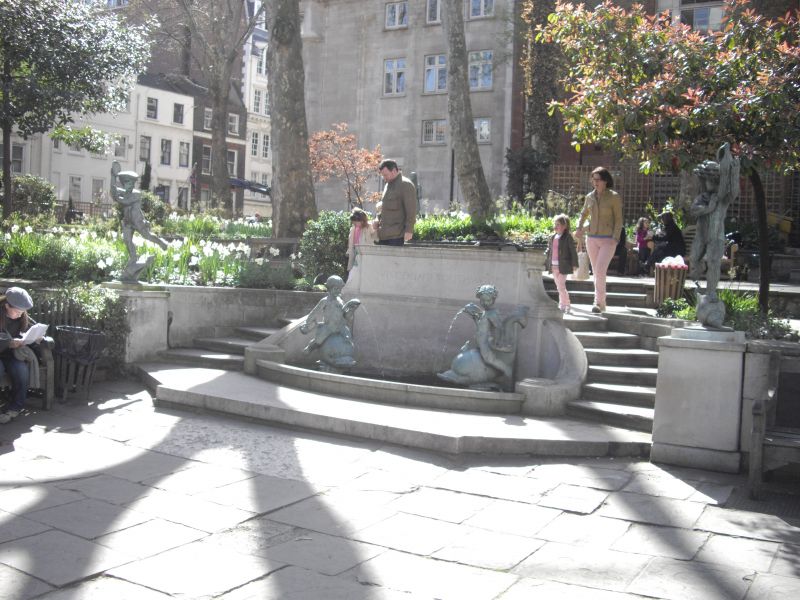 Memorial to Viscount Southwood (1873-1946). 1947-8 by A E Richardson; sculptor Alfred F Hardiman. Built by 'skilled deaf and dumb masons' under the supervision of Rattee and Kett. Portland stone fountain with four bronze figures of children. The fountain is oval in shape (22ft 3" by 13 ft 3"), with a high back with upturned volutes set against a raised garden created with a bequest from Lord Southwood, this is reached via steps either side, which with their retaining walls form part of the fountain's composition. Two small figures sit astride dolphins within the fountain; two more figures perch on conch shells set on the piers of the retaining walls. The back is inscribed 'VISCOUNT SOUTHWOOD'; behind a pair of niches house caskets with his ashes and those of his wife, Alice Louise Stone (1865-951).

The publisher Julius Salter Elias, created Baron and later Viscount Southwood, bequeathed money to St James's, Piccadilly, for a memorial garden. This was to be a symbol of the church's bombing and restoration, a commemoration of the courage of the people of London during the war, and a pleasant retreat from the bustle of central London. Derelict ground next to the churchyard was purchased, and dedicated by the Bishop of London on 12 May 1946. The memorial to Southwood is set in front of this. The figures commemorate Southwood's work for children as Chairman of what is now Great Ormond Street Hospital. Hardiman himself died before the monument was unveiled. Included for the quality of the sculpture, as a novel piece of garden design and as a poignant memorial from the first days of post-war reconstruction.
(The Builder: 17 May 1946; The Builder: 9 May 1947; The Builder: 20 May and 2 September 1949).