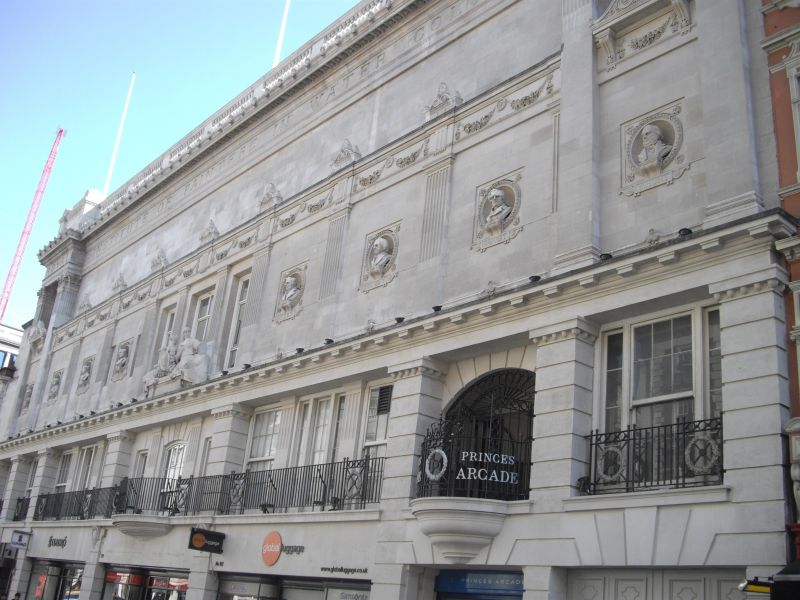 Large institutional premises with shops and arcade to ground floor. 1881-3 by E.R. Robson; main sculptural embellishment by Onslow Ford.
EXTERIOR: monumental institutional building in the Free Renaissance style. Portland stone, concealed roof. 3 storeys, the uppermost much higher. 9 bays at second floor height. Rusticated pilasters articulate ground and first floors, with late C20 shop fronts between. Second bay from right leads to the Prince's Arcade, with a projecting semi-circular balcony at first floor level, with an opening above, illuminating the double-height arcade. Ornamental railings (renewed) at first floor level in front of windows (renewed). Dentil cornice at second floor level. Projecting end bays with paired Corinthian pilasters. Lower pilastrade to centre of second floor front, with part-fluted pilasters carrying a garland-hung frieze. Over each pilaster is a triglyph and a scrolled terminal with anthemion. Triple windows to centre with allegorical sculptures in front, flanking a cartouche dated 1883: carved by Verheyden, they originally embellished the main entrance. Square moulded frames with roundels to each main bay: set within wreaths are busts on socles of the principal practitioners of the watercolourist's art: from left to right these represent Sandby, Cozens, Girtin, Turner, D. Cox, De Wint, Barret and W. Hunt. Blind wall over, expressing the former gallery behind. Balustraded parapet above crowning entablature, the frieze of which is inscribed in sunken capitals ROYAL INSTITUTE OF PAINTERS IN WATER COLOUR Fd. 1831; dentil cornice and with lion-head stops to the cymatium. Rear elevations faced in red and yellow brick.
INTERIOR: not inspected, but known to be severely altered. The Prince's Arcade is a uniform arcade of shops, each with projecting shopfronts carried on scrolled brackets; the front section (now occupied by Nos 1-11 and 2-10 Prince's Arcade, is double height with a blind arcade at the upper level. The southern part is lower; the northernmost bay has decorative plasterwork to the ceiling incorporating Prince of Wales feathers set within wreaths and garlands.
HISTORY: Now largely occupied (since 1976) by the British Academy of Film and Television Arts, the premises were built to house the RIPWC, a body founded in 1831 as the New Society of Painters in Water Colours. The building reflects the status of the medium of watercolours in the Victorian period, a status that needed championing on account of Royal Academy resistance to accord water colours the respect accorded to oil painting. Artists, patrons and bankers combined to form the Piccadilly Art Galleries Co Ltd in 1881, which carried out the development. The eventual architect, E.R. Robson, was a friend of James Orrock, one of the principal figures behind the scheme. The original building was opened by the Prince and Princess of Wales in 1883: its main public gallery was named the Prince's Hall. The Prince's Hall was joined with the Prince's Hotel to the rear in 1900, and became used as a restaurant. The interior was considerably altered in 1907-8, when the facade underwent modification too. Further alterations took place in 1929-33 when the Prince's Arcade was inserted into the second bay from right. Bomb damage in WW2 led to further alterations, as did its post-war use as Pan-American Airlines' HQ premises (drastic change took place in 1956). Prince's Arcade was renovated in 1983. The building to the rear of the former RIPWC, now joined together as an office building named Prince's House, was originally built as the Prince's Hotel. The building is listed for the architectural quality of its street frontage to Piccadilly, and for its historical interest as a rare and remarkable art institution's premises. Prince's Arcade is also of special interest but the rear part of Prince's House, the former hotel, is of lesser interest.