A Grade I Listed Building in Derby, Derbyshire 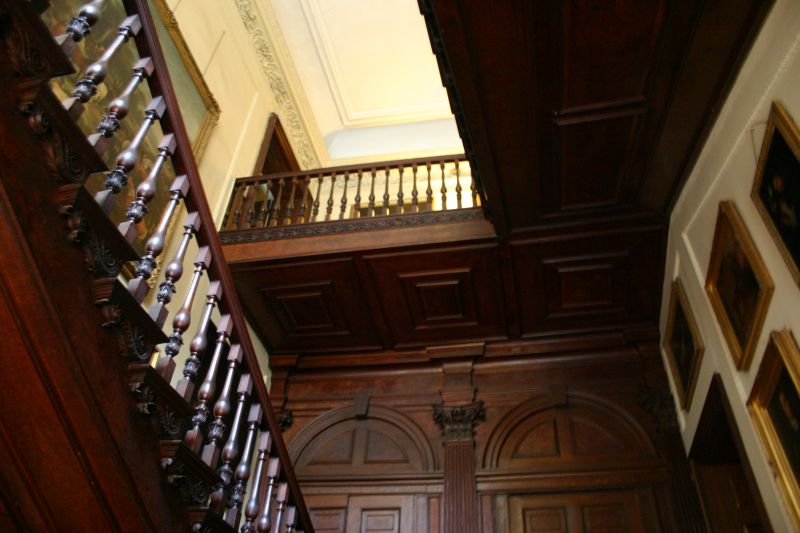 PARISH OF CALKE CALKE PARK
SK 32 SE
4/13
29-5-52 Calke Abbey
I
GV
Country House. C16 and C17, extensively remodelled in 1702-4
possibly by William Johnson of Nottingham. Portico 1806-8 by
William Wilkins Senior, when the staircase added in 1728-9 by
James Gibbs was removed. Alterations 1841-2 by Henry Stevens.
Rubblestone, brick, render and sandstone ashlar from Pistern
Hill quarry. Roofs hidden behind balustraded parapets. Moulded
plinth, second floor band and richly moulded cornice. Basement
and two principal storeys. Basically an early C18 rectangular
plan with pavilions projecting at the angles, built around the
courtyard of an earlier house and incorporating parts of that
house, accounting for certain irregularities. South elevation
of 3-7-3 bays. In the centre a three-bay pedimented Ionic
portico over a basement with coupled pilasters, added by William
Wilkins. The basement forms a porch arcade to the present main
entrance with half glazed door. Flanked on each side by three
glazing bar sashes in stepped keyed and moulded architraves.
Central doorway above, now a window, has a sumptuous moulded
architrave with broken segmental pediment on lavish consoles.
Flanked on each side by three glazing bar sashes in stepped
keyed and moulded architraves. Seven similar windows above.
Projecting three bay pavilions have three tiers of similar
fenestration, flanked by giant fluted pilasters on tall bases
and with a rare form of composite capitals based on a plate in
Philibert de l'Orme's treatise on architecture published in the
C17. The capitals are set well below the cornice. The orders
are repeated on the return elevations. East elevation of 2-10-2
bays. The paired end bays continue the theme of the pavilions
with giant orders repeated on the returns. The ten bays between
have a full length balcony on banded columns, added by Wilkins.
Former doorway with stepped keyed and moulded architrave,
flanked by glazing bar sashes in moulded architraves. Ten
glazing bar sashes above in moulded architraves, the centre pair
more elaborate. Ten similar windows above again. West
elevation of 3-7-3 bays, the centre deeply recessed, with three
bay returns. The projecting three bays repeat the theme of the
pavilions to the south elevation. The centre part is rendered
and the fenestration is grouped 2-3-2, with glazing bar sashes
in moulded architraves. Central doorcase with a variant version
of a Gibbs surround, with volutes embracing the window above.
The north return has an odd recessed bay suggesting remodelling
of an earlier house. North elevation of 3-8-3 bays and two
storeys owing to the rise in ground level. Glazing bar sashes
in stepped keyed surrounds. Angle quoins to three bay
projections. Various later service buildings attached including
an early C19 single storey block with tripartite windows.
Internal courtyard has a three-bay round-arched arcade of early
C17 character and various evidence of disturbed masonry. The
fenestration is mostly glazing bar sashes in plain raised
surrounds. Lead downpipes with moulded brackets and hopper
heads. Interior: low entrance hall with two iron columns.
Principal staircase to the north east climbs the full height of
the house. Two balusters per tread, each standing on a carved
miniature urn. Carved treads and richly panelled dado. The
lobby and landings have round-arched doors and wooden Corinthian
pilasters. The saloon fills the upper two storeys of the centre
part of the south range, originally the hall. At each end is a
fireplace flanked by coupled Corinthian pilasters carrying an
enormous broken segmental pediment without bedmould. Panelling
in two tiers, Corinthian pilasters to the lower part. Heavily
coffered ceiling. The saloon was remodelled by Stevens. Dining
room in the south west pavilion, remodelled 1793-4 by Wilkins,
with Ionic columns to buffet recess and delicate plasterwork.
Drawing room in the south east pavilion, also remodelled by
Wilkins, as was the library to the north. Earlier evidence in
one bedroom which has staggered panelling and a sumptuous late
C16 carved chimneypiece. The house stands on the site of an
Augustinian Priory founded c1131. It came into the possession
of Sir Henry Harpur in 1621 and remained in the Harpur and
Harpur-Crewe family until 1985. Bibliography: H Colvin 'Calke
Abbey, Derbyshire'in Country Life October-November 1984 pp
1062-1065, 1162-1165 and 1242-1246. H Colvin 'Calke Abbey' The
National Trust 1985.