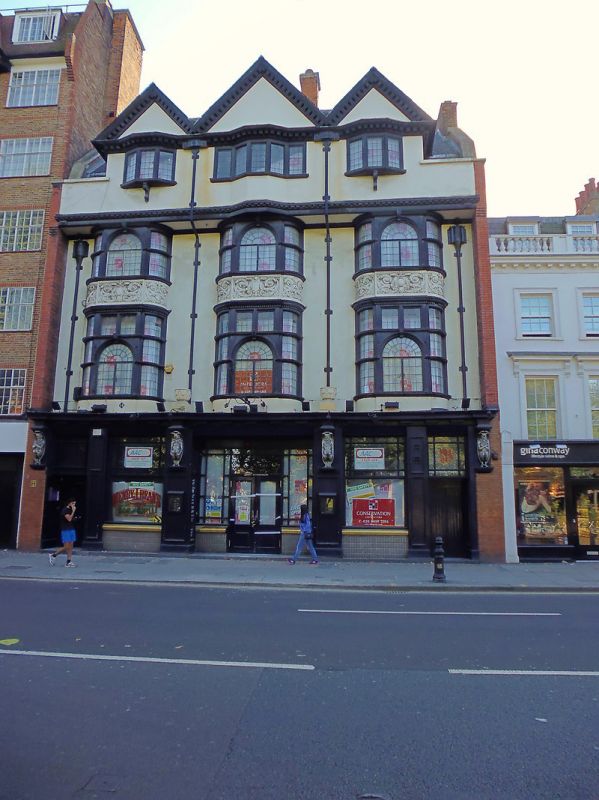 Henry J. Beans (formerly the Six Bells). Public house, 1898, by G.R. Crickmay and Son. Four storey exterior of rendered brick; slate roof.
EXTERIOR: triple bay gabled front of three storeys with a jettied attic. Ground floor altered, but retains carved brackets in the form of winged devils. Entrance to upper flats from the recessed entrance to the left, which has a plank door with decorative furniture, set beneath a Tudor arched opening. First and second floors sport oriel windows after the manner of Shaw's House in Ipswich: leaded lights, with decorative aprons at second floor level. Jettied attic storey with dentil enrichment to wall-plate, cornice and gable surrounds.
INTERIOR: ground floor much altered. Upper floors (not inspected) are flats.
HISTORY: this has long been the site of a public house, and was celebrated for its bowling green. The rebuilding involved the loss of a fairly ordinary two-storey building and its replacement with this influential design, which shows the clear influence of Norman Sham and Arts and Crafts architecture. An article in 'Licensing World' (14 March 1914) described the pub as the prototype of the 'Mock Antique Tavern', a new style of pub design which supplanted the 'Gin Palace', and which was subsequently built in considerable numbers. The pub underwent much alteration in 1959 when it was reopened as 'The Bird's Nest at the Six Bells'. Further alterations followed in 1983 when it acquired its current name. In spite of changes to the ground floor it remains a fine and novel example of Late Victorian public house design.
SOURCE: Mark Girouard, 'Victorian Pubs' (1975), 111 & 190.