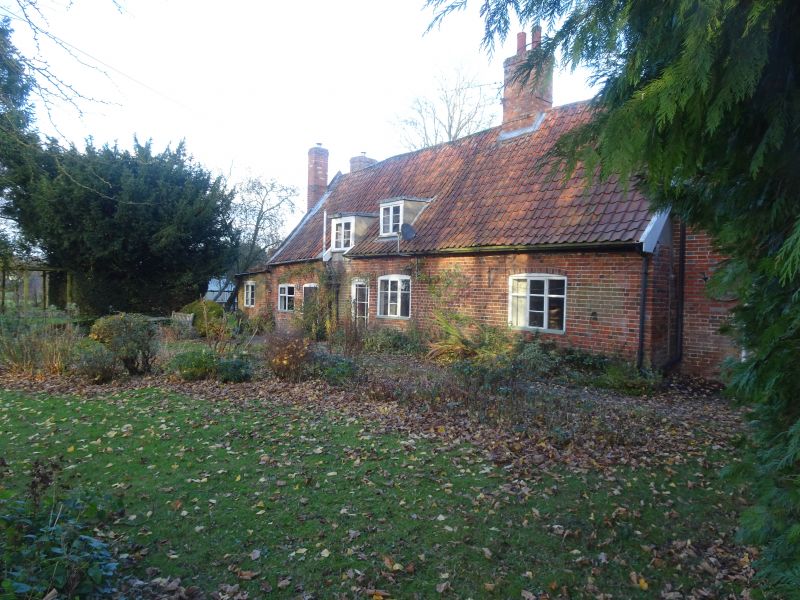 House, formerly associated with the village forge and smithy, and at one time
divided into cottages. Late C16. 1½ storeys. Timber-framed basically, but
most of the outer framing has been replaced in stages during the C18 and C19
by red brick walling, some with blue headers, in part English, part Flemish,
and part random bond. Clay pantiles. The internal chimney-stack hats a partly
rendered plain red brick shaft. Tumbled brickwork to the gables. 2 flat-
headed dormers; 3-light casement windows with transomes, and arched heads to
frames and surrounds. One plank door and another with 4 flush panels. The
core of the house has a 2-cell lobby entrance plan, in 4 bays including a
chimney-bay. The 2-bay ground floor room to the north of the stack has an
exposed ceiling with plain unchamfered heavy joists and a chamfered main beam
with curved stops. The studs are widely-spaced but substantial. Roof with
clasped side purlins. Further north, a bay added in the C18 has thin joists
set on edge. Behind it, a small lean-to, added to the rear wall prior to the
brick facing, covers a section of pargetting in panels with an ornate raised
frieze at eaves level. At the south end of the house, a C19 extension with a
large gable-end stack, which may have been a separate cottage. The 1½-storey
height is most unusual for a post-medieval house in the South Elmhan parishes,
and the fragment of pargetting is the most ornate to survive there.