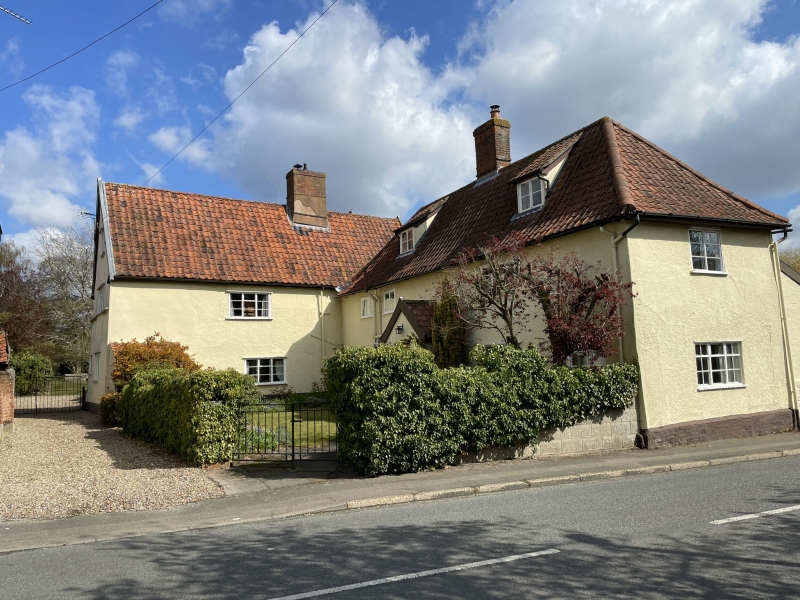 WALSHAM LE WILLOWS
THE STREET (NORTH SIDE)
The Tiled House

House. C15, C16 and C17. Timber-framed and rendered with pantiled roofs.
Formerly 2 separate houses, now made into one. 2 storeys and attics; L-shaped
form. The older range, aligned east-west, previously 'Tiled Cottage', has
various C20 casement windows, entrance doors at rear, an internal chimney-
stack with a plain rendered rectangular shaft. To left of stack, 2 bays of a
former open hall: smoke-blackened roof, crown-post to open truss with a
slender octagonal shaft moulded at cap and base, originally braced 4 ways at
the head with plank braces, but those to the collar removed. Cambered tie-
beam with long arched braces in situ. Shutter slides and remains of the hall
window mullions on the upper floor. Chimney-stack, inserted against the truss
at the upper end of the hall, has a plain cambered timber lintel. At ceiling
level above the stack a beam with shallow moulding which formed part of the
end wall of the hall and may have been a dais beam. To the side of the stack,
also within the hall partition, is a doorway with a fine heavy moulded ogee
arch. This appears to be in situ but does not accord with the other features
of the interior, and may have been reused. The inserted ceiling in the hall
has a main beam with 3" chamfer, triangle stops, and small solid supporting
braces, hollow-chamfered; joists plain. Remains of a stair trap. Against the
west-end of the house, indications of a cross-entry: a blocked doorway with
shallow 4-centred arch and plain spandrels in the front wall, evidence for
another at the rear, but no signs that the house continued further westwards.
To the east of the stack, a break in the frame and a change of style indicate
that the parlour is a C16 replacement/addition to the older house. The north-
south range was formerly set corner-to-corner with the older range in a unit-
house relationship, but the 2 are now linked by the C16 parlour extension.
Hipped roof, and a small stair wing added on the east. An internal chimney-
stack with a plain rebuilt red brick shaft. 2 dormers with sloping roofs,
'rendered cheeks, and 2-light casement windows. 2-light and 3-light old
casements with a single bar to lights to remainder of front. A small enclosed
and gabled entrance porch. Frame in 5 bays. The stack has 2 back-to-back
hearths with plain timber lintels. On its north side 2 bays with main beam
supported by small solid braces and heavy unchamfered joists. Housings for a
3-light diamond-mullioned window in the end wall. Edge-halved and bridled
scarfs in the wallplates. Roof in 8 bays, including the 2 hipped end bays,
with 2 rows of stepped butt purlins.