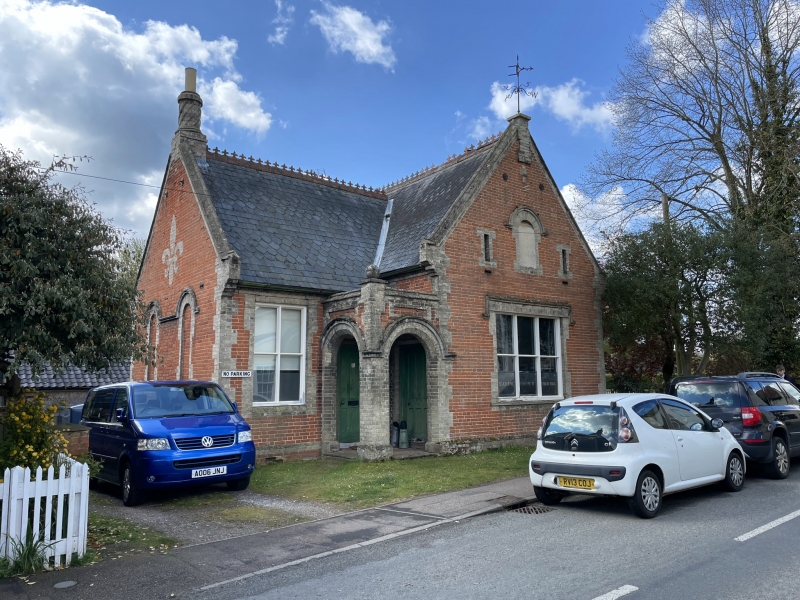 Village hall. Dated 1888. Flemish bond red brick with white brick dressings.
Fishscale slate roof with fleur-de-lis cresting to ridge tiles and moulded brick
coping to gable parapets which have moulded brick kneelers. The east and west
gables have chimneystacks with moulded white terracotta shafts; the north gable
has a wrought-iron weathervane and the south gable has a small ball finial.
PLAN: T-shaped, almost cruciform, on plan, with a porch to the main entrance in
the north east angle. Internal arrangement not investigated. EXTERIOR: Single
storey. The north front to the road is asymetrical and has a projecting gable-
ended wing to the right with a 3-light ground floor window with a hood mould and
a blocked round-headed opening above with a hood mould and flanking ventilation
slits. 2-light windows to left and a brick porch in the angle with chamfered
round arch on both sides, a ball finial on the corner of the parapet and C19
panelled inner doors. The left hand (east) gable end has 2 blind round-headed
panels with linked hood moulds and a large fleur-de-lis in white brick in the
gable above. The right hand west elevation is symmetrical and 3-bays, the
centre gabled breaks forward with a large blind round-headed panel with a hood
mould and a large quatrefoil in white brick in the gable above. The flanking
bays have 2-light windows. On the plinth at the centre the foundation stone
inscribed 'Walsham Public Hall. This stone was laid by Richard Martineau,
President of the Walsham Institute .... 1888'. The The south gable end has a 2-
light window with margin panes and 2 lancets in the gable above in white brick
surrounds. All the windows are C19 and have thin moulded wooden mullions and
transom bars. INTERIOR not inspected.