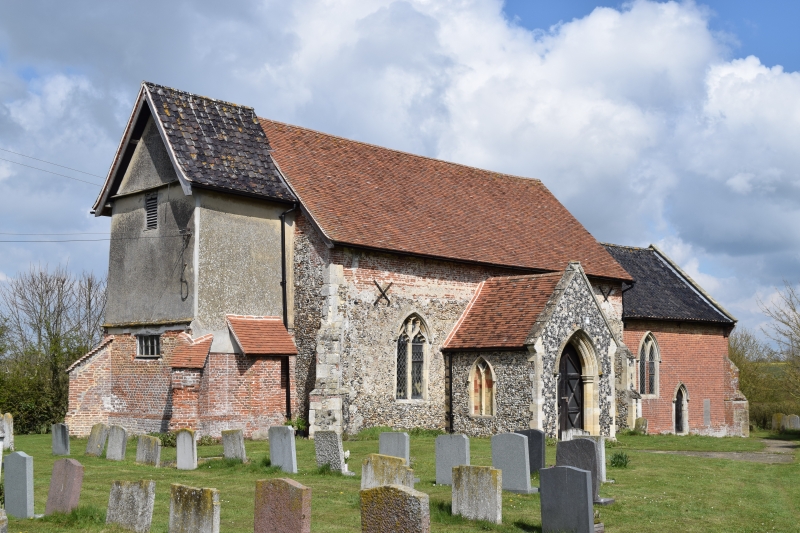 Parish church. Partly medieval; early C16 stump of tower; chancel rebuilt
c.1800. Restored and re-furnished 1873. Nave, chancel, south porch, remains
of small west tower. C14 nave of flint rubble (formerly plastered) with stone
dressings; the walls were later heightened in red brick. Tower stump is of
red brick with diaperwork in dark headers; above is a timber framed and
plastered belfry, probably of C16-C17 date, with a gabled pantiled roof. Red
brick chancel. Nave has plaintiled roof; chancel has glazed black pantiles.
South nave wall has 2 C14 2-light windows, one with carved hoodmould stops.
Simple C14 north and south doorways, that to the north blocked. Simple porch,
much restored. Chancel has re-set C14 windows and Priest's doorway, including
a good 3-light east window with reticulated tracery and carved stops to the
hoodmould. Interior. No chancel arch. 5-bay nave roof, perhaps c.1500, each
truss with arched-braces from the wallposts and further braces to a high
collar. At the foot of each wallpost is a carved head: most of these seem to
be original. Moulded cornice. Chancel roof has a vernacular form. At the
south east corner of the nave is a trefoil-arched piscina. Good C15 octagonal
font, the bowl with shield-bearing angels alternating with the Signs of the
Evangelists; against the stem are 4 lions and between them smaller Wild Men.
Pyramidal font cover, perhaps C18. On the north wall of the nave are the Arms
of George IV.