A Grade I Listed Building in Combs, Suffolk 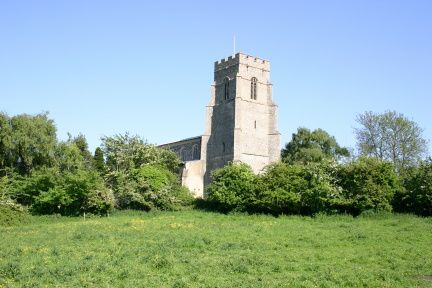 Parish church, mainly C14 and C15. Restoration (mainly to chancel) 1867 by
H.J. Green of Norwich. Nave, chancel, north and south aisles, west tower,
north and south porches. Flint and septaria rubble with reused limestone
blocks; the north aisle and porch are plastered. Nave and aisle roofs are
low-pitched and leaded, chancel and porch roofs plaintiled. The chancel has
some high-quality work of c.1360, but internally much restored. A large 4-
light east window with intersecting tracery. North and south windows with
dagger tracery and carved hoodmould stops. Flanking the east window are image
niches, and on the south wall a fine composition with piscina and sedilia;
fine C14 work but almost entirely reconstructed 1867. A circular window above
with unusual tracery. C19 roof with deep enriched cornice. Nave arcade, mid
C14, with 6 bays of octagonal columns with moulded capitals. Late C14 tower,
massive but plain: triple-chamfered formerly-open arches to north and south
for processions to pass through (the tower abuts the churchyard boundary). A
stoup is at the west doorway. The belfry windows are of C15. Disguised mid
C14 timber-framed north porch, with heavy moulded arched outer doorway,
kneebraced studded side walls and coupled rafter roof; C17 plank outer door
with medieval ironwork. Inner north doorway also of c.1350; attached shafts
with foliate capitals and grotesque hood-mould stops. North aisle has good
C15 windows; the lean-to roof has moulded principals and a brattished cornice.
South aisle has a similar roof but retains some C14 features: a plain piscina
and west window; the south windows have later C15 tracery (a will of 1472 may
refer). Clerestory windows are similar; the arch-braced nave roof was rebuilt
in C18 with tiebeams and kingposts, reusing the C15 components such as moulded
principals. The south porch is of narrow mid C16 buff bricks, with
hoodmoulded side windows and polygonal corner buttresses; the outer doorway
was reconstructed in early C18 with an arch of very finely-gauged red brick.
Late C14 octagonal limestone font: the bowl has shields bearing shallow
tracery on each of the splayed faces, and the buttressed stem has window
tracery. The base of the roodscreen survives with restored paintwork and
stencilling; a will of 1472 refers to making of rood stairs. A damaged C15
parclose screen in the south aisle, and one section of a lower screen in the
north. Two sets of 12 C15 benches in the nave with good poppyhead ends; the
buttresses have carved human and animal figures; the front rows are much
restored. Early C17 hexagonal pulpit with arcaded panelled sides and a book
board supported by scrolled brackets; C19 limestone plinth. A wall monument
in the chancel to Thomas Sotherbie, d.1647. Good C15 stained glass in several
windows: for details of this and other features, Suffolk Churches: H. Munro.
Cautley.