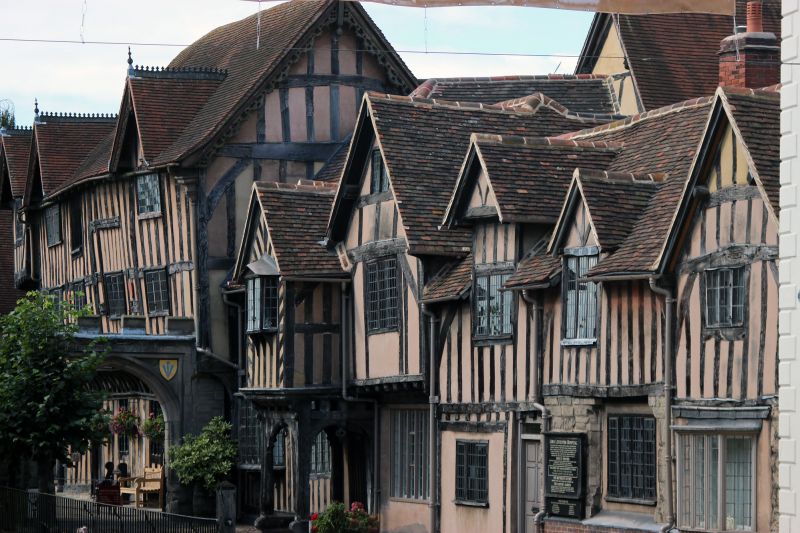 2.
Built round a courtyard. South range with Guildhall circa 1483. East
range before 1400. North range with Master's House probably medieval,
much restored with some C16 partitions and south wall. West wing with
King James's Banqueting Hall, late medieval with modern facsimile west
wall, fine early open timber roof with tiebeams.
For full history see Transactions of Birtaimham Archaeological Society,
Vol LX, 1936.
Originally built by the Guild of St George and the Holy Trinity in C15,
and taken by Lord Leicester in 1571 for the purpose of forming a pensioners'
hospital. 2 storey plus attic. Heavy timber framing of various types,
in fair state of repair, much of which is original close set studding.
Extensive restoration in C18 and also about 1850, when timber framing was
uncovered by removal of plaster and two small flush gables were added to
the High Street elevation. Restored roof, mainly of old tiles. Internal
features of considerable interest include open quadrangle with covered
gallery, Guildhall (right hand side of main entrance), which was converted
to the Brethren's Quarters in C18.
VCH, viii, pp. 423-6.

Nos 54 and 56, and the Hospital of Robert Dudley, Earl of Leicester, in
High Street (North Side): Nos 1 and 1A Brook Street, and West Gate and
St James's Chapel, all form a group.