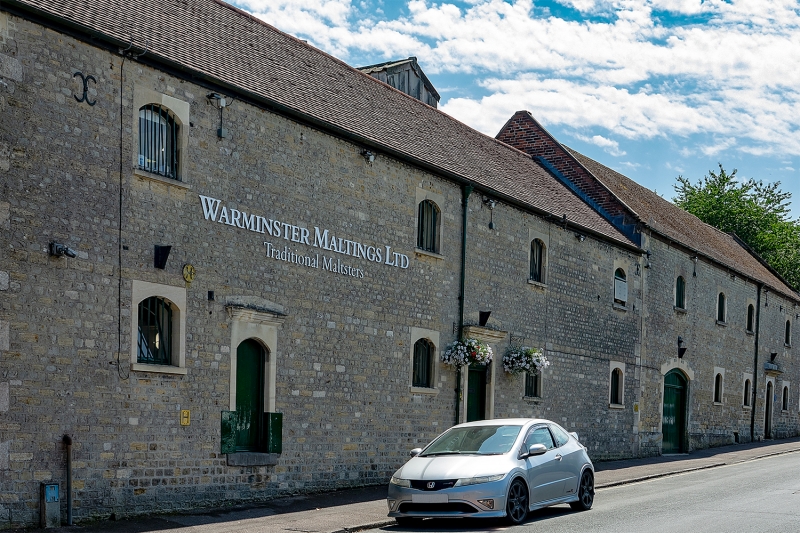 C18, altered and rebuilt in 1879 for the Morgan family of Maltsters in typical local materials.

PLAN: Two storeys with two ranges at right angles to the front range and a back range oriented north to south.

MATERIALS: Local rubble stone with ashlar dressings. Some use of brick. Timber framed windows with transoms. Clay tile roofs to most of the building, although some roofs have asbestos tiles. Cast iron columns to the malt floors.

EXTERIOR:
The front elevation (west) is constructed of coursed rubble stone with ashlar quoins and dressings to the windows and doors. The front range is divided into two blocks. The right hand block has five windows to the first floor, four on the ground floor. There is a segmental headed yard entry, with double timber doors, to the left and to the right of centre is a segmental headed doorway with moulded hood and stone quoins. On the lintel is painted in mid-C19 lettering 'WILLIAM FRANK MORGAN/Licensed Maltster'. The left hand block has four windows to ground and first floor and two doors with segmental headed lintels and moulded hoods. A low wall with an entrance to the rear links with No 37. The south elevation is constructed of a mixture of coursed rubble stone and brick and has ashlar dressings to the windows of the no. 4 malt floor. The south elevation is divided into five blocks, the third being the malt floor. The fourth block includes timber sliding doors above the ground floor and a further door above with a hoist for lifting barley. The fifth block is the 1890 sweater kiln constructed of brick, with an asbestos tile roof and a timber door to the upper level. To the east elevation is the return side of the sweater kiln and a new storage range built in the mid-C20 which is of lesser importance. The garden elevation (north) includes the side elevation of the no. 1 malt floor and the renewed timber windows are emphasised by brick surrounds.

INTERIOR: To the interior the process of the malthouse is clearly legible. Accessed via the second door from the left the late-C19 door leads to a central hall with the converted offices and museum to either side. The rest of the building is divided into two blocks of two (four malt floors) with a central outside walkway. To each block is a lower and upper malt floor with a central dividing wall and the kilns to the west end and the brick steeps to the east end. To the south-east corner is the sweater kiln which retains its perforated tile floor.

HISTORY: Wiltshire is known as a 'malting county' and is one of the few counties where traditional floor malt is produced. The malting industry was of particular importance in Warminster and by the middle of the C18 Warminster's malting trade was said to be bigger than that of any other town in the west of England and was supplying Somerset and much of Bristol. In 1720 there were 36 malthouses in Warminster but in the early C19 Warminster's malting trade began its decline.

Pound Street Malthouse was owned by the firm Morgan/Beaven. The malthouse is reputed to be C18 but it was substantially remodelled in 1879 when under the direction of E. S. Beaven, nicknamed 'Barley Beaven', it became an academy of barley breeding and malting until 1941. Beaven began working for W. F. Morgan at Pound Street in 1878 and was responsible for kiln developments and barley breeding, for which he won a number of awards. His outstanding achievements in barley breeding earned him an honorary doctorate from Cambridge University. His most notable barley was the Plumage Archer which was introduced to British farmers in 1905 and became the mainstay of UK malting barley production for the next fifty years.

REASONS FOR DESIGNATION:
Pound Street Malthouse is deignated at Grade II* for the following principal reasons:
* A unique survival of a malthouse still in use as a floor maltings which retains the legibility of its industrial process
* The continued use of the building as a floor maltings has ensured the survival of the industrial fixtures and fittings to an exceptional degree, including E. S. Beaven's patented kilns and the brick built steeps
* The malthouse has a strong documented relationship with E. S. Beaven, 'Barley Beaven', who was a leading figure in barley breeding