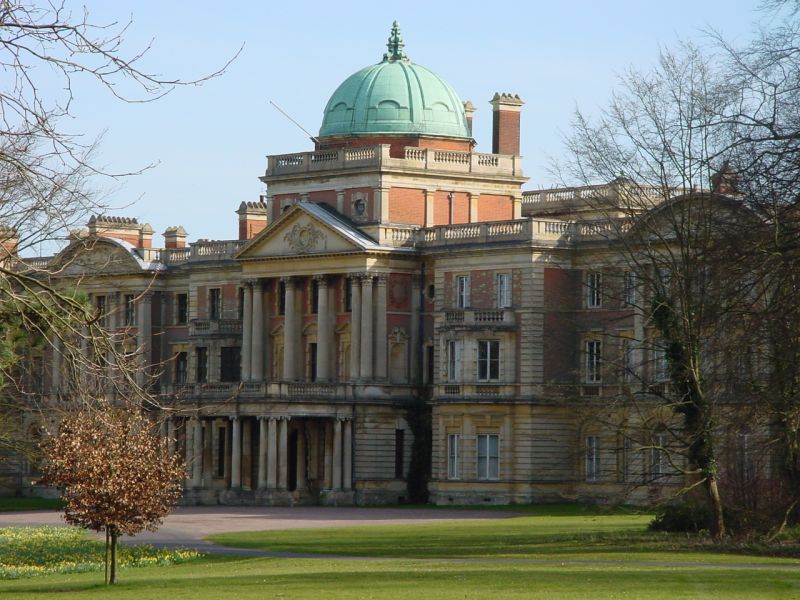 Large country mansion, built in 2 major phases. The west wing, c.1879, by John
Norton for Prince Frederick Duleep Singh, formerly Maharajah of the Punjab.
(This wing is believed to contain the core of the earlier Hall of c.1760). The
central hall and east wing added 1899-1903 by William Young for Edward
Guinness, 1st Viscount Iveagh. In the Classical Style. West wing of 3
storeys and 11 windows, A:B:C:B:A. Red brick with limestone dressings; ground
floor of banded rusticated ashlar, upper floors of brick with rusticated
quoins. Moulded cornice and balustraded parapets. Entrance bay slightly set
forward, with segmental pediment on 4 giant columns. Set forward end bays with
2-storey splayed bay windows. French casement windows; at ground floor with
semi-circular heads, at 1st floor with pediments. Low-pitched leaded and
slated roofs with chimneys of red brick. The east wing added by Young is
almost identical externally; his kitchen wing beyond was demolished c.1970. As
a centrepiece he added the Marble Hall, rising through 4 storeys, surmounted by
a cupola with copper-covered dome. The extrance bay has a portico rising
through 1st and 2nd storeys; the pediment has a cartouche with the date 1900,
flanked by palm-fronds. The attached porte-cochere has a balustraded flat roof
and stands on clustered columns. The main rooms in the west wing have
elaborate wood and plaster decoration, with Hindu and Moorish motifs
intermingled with classical forms. The entrance hall and west drawing room
have drop-traceried arcading and are heavily encrusted with Hindu ornament. The
west staircase has traces of original bright red paint; other spaces also once
had bright primary-coloured paintwork. Young's central Indian Hall of white
Carrera marble dominates the house; top lit, with the dome traceried and the
pendentives encrusted with stalactites. Arcaded balconies on 4 sides are
recessed behind the main supporting drop-traceried arches, all enriched in a
similar manner to the west entrance hall. The east wing has no Indian work;
the Cedar Room has joinery in the Rennaisance style of high quality, and the
staircase and other spaces are also in the manner of C17 and C18. For detailed
description, see article in Country Life magazine, 14th-21st March 1984.