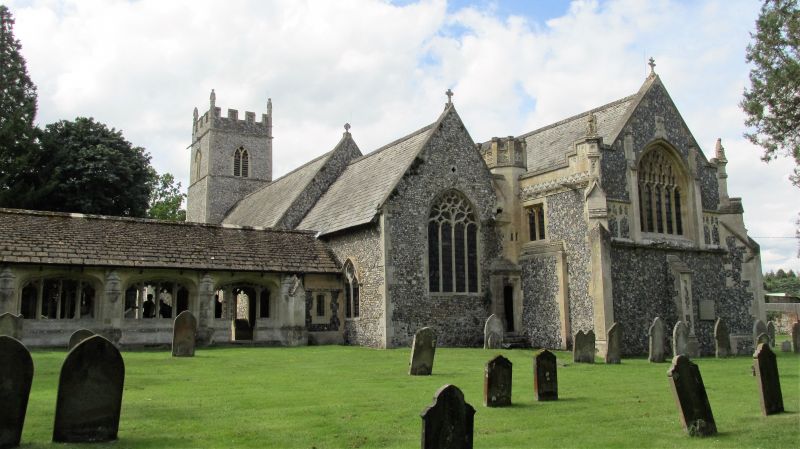 The medieval nave has a C12 core; a blocked lancet in the north wall; another reset from south wall. Two north windows and east window inserted mid C14; two hood-moulded square-headed windows and south porch added C15, heavily restored 1869. West tower of c.1421 in three stages on blank-traceried flushwork base, crenellated parapets with pinnacles, mask gargoyles and two-light west window. A simple C14 angle piscina and dropped-cill sedilia. Medieval roofs renewed 1904; nave has a richly-carved tie-beam roof with king-and queen-posts. Caröe's work is a development of the Perpendicular style, but many features are entirely original. Much heavily-carved and embellished ashlar-work, with distinctive elements such as
buttresses, gargoyles and elliptical arch-forms.

Figures of Saints Andrew, Patrick and others stand upon the porch and parapets at south and west sides. Richly carved Perpendicular nave roof of double-hammer beam type, crowded with tiers of angels; the organ, pulpit and choir-stalls also heavily carved. Altar reredos of alabaster is based on that of St. Alban's Abbey; it depicts the Supper at Emmaus, surrounded by niches with the twelve apostles and figures of saints. Also of carved alabaster is the octagonal font.

Much good C19 and C20 stained glass; the east chapel window by Kempe, to Prince Frederick Duleep Singh of Elveden Hall; a south window by Clayton and Bell. The south tower and cloister of 1922 are of ashlar in the Perpendicular style, with vaulted stone ceilings; the tower has much good flushwork and crenellated parapets.