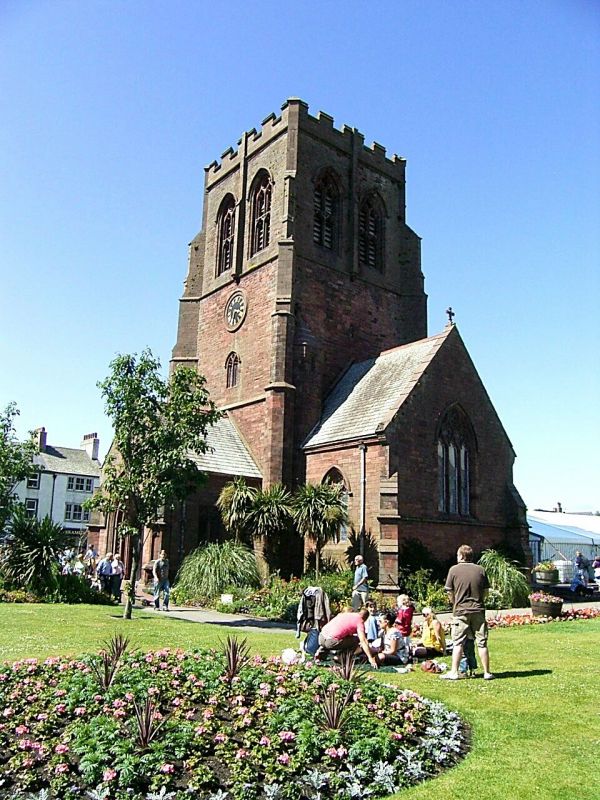 II
Church, 1883, by C.J.Ferguson, for Margaret Gibson in memory of her parents, which was converted into chapel and parish community centre in the mid-1970's and later after fire destroyed the nave and much of the church's east end.

PLAN: Linear with projecting porch and transepts and including nave pier bases and surviving chancel walls.

EXTERIOR: The west porch has diagonal buttresses and a moulded west doorway decorated with shafts and an order of carving. The transepts have diagonal buttresses, two-light pointed-arch west windows with geometrical tracery and three-light pointed arch north and south windows with geometrical tracery. The porch and south transept gables are topped with a small cross. The tower has 1880's two-leaf doors and is of three stages with string courses between each stage. The tower's second stage has two-light pointed arch west and east windows, a clock face set within a circular moulding on the west face, and two small centrally positioned plain rectangular north and south windows. The top stage has large pairs of belfry windows with transoms separated by thin buttresses on each face and is finished in a crenellated parapet above a string course. There is a south western projecting stair turret running from the ground floor to the tower's second stage.

INTERIOR: The tower contains the inner porch doorway of the 1693 church with Doric pilasters, a pediment dated 1893 in Roman numerals, and glass and timber two-leaf round arch doors. The 1880's roofs survive; those in the transepts are canted wagon roofs and there is a flat timber ceiling to the crossing, divided into panels by moulded ribs with flat bosses at the intersections. The south transept functions as the chapel and preserves a good quality Hardman window in situ together with windows rescued from the fire of 1971 and presented in panels. The north transept functions as the café with services. The crossing functions as a café with offices above on a modern inserted wooden floor. The tower's second stage holds a boiler and timber steps leading to a platform containing the clock mechanism stamped `Smith and Sons, Clerkenwell Steam Clock Factory'. Above in the belfry there is the bell and its timber supporting frame.

HISTORY: St Nicholas' Church was originally built in 1693. In 1701 Mildred Warner Gale, grandmother of American President George Washington, was buried in the churchyard. Her daughter, also named Mildred, was baptised in the church and on her death was also buried in the churchyard. The church was rebuilt in 1883 by C.J. Ferguson at the expense of Margaret Gibson in memory of her parents and consecrated on the 31st August that year by the Rt. Rev. Harvey Goodwin, Bishop of Carlisle. It consisted of a nave, chancel, side chapel, clerestory and west tower, inside of which the original west doorway of the earlier church was preserved. The church had a seating capacity of 600 but could accommodate up to 1000. On 31st August 1971 fire destroyed much of the nave and sanctuary. Rebuilding was initially considered but instead the church tower was fitted out as an auxiliary chapel for services with regular coffee mornings being held there also. In the mid-1970's a plan was approved by the Parochial Church Council to increase use of the tower by providing more facilities that would be of benefit to the community. Development went ahead and the tower became the Centre for Worship, Social Activity and Tourism, being dedicated on its opening by the Bishop of Carlisle. The tourist facilities were eventually moved to another site but the tower continues to provide a place of regular worship, social activity and parish offices, together with facilities for light refreshments and services. The current usage has a chapel in the south transept, café with offices above in the crossing and service rooms with café above in the north transept. Access to the clock tower is gained via a spiral stair from the porch. The church was listed at Grade B in 1949.

SOURCES: Nikolaus Pevsner: The Buildings of England: Cumberland and Westmorland (1967) 203-4.

SUMMARY OF IMPORTANCE: A mid-1970's and later conversion of a late C19th church tower, porch and transepts into a community facility which has been carried out in an architecturally successful and sympathetic manner after fire damage had resulted in demolition of the nave and much of the church's eastern end. The nave pier bases and remains of the chancel wall are of lesser importance.