Church of St Michael and remains of churchyard cross

A Grade I Listed Building in High Ercall, Telford and Wrekin 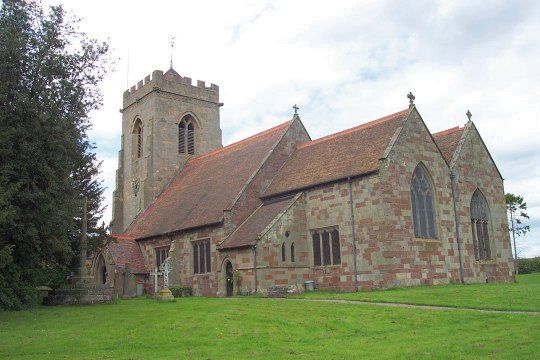 MATERIALS: sandstone ashlar with tiled roof and oak roof structure. The tower is principally grey sandstone, while the other parts of the church are a mixture of red and grey sandstone.

PLAN: a three bay nave with north and south aisles separated by arcades, and with a west tower. To the east is a chancel with chapel to the north. The vestry on the south side of the chancel and the south porch are of 1865.

EXTERIOR: the mainly perpendicular square C12 tower has an embattled parapet and a low spirelet and vane. There are angle buttresses with offsets. Below the parapet is a curved stone cornice with gargoyles and figureheads. Underneath is a quatrefoil frieze. There are three, two-light bell openings with hood moulds, and quatrefoils in the tracery. The north, west and south elevations have a clock positioned at differing heights. The west face has a perpendicular window at ground floor level. The north face has a stair turret. The plinth is moulded.

In churchyard to south of the church are some C18 and early C19 tomb chests and C18 headstones.

INTERIOR: the central three bay nave has transitional north and south arcades with circular piers, square capitals with volutes, leaves and rams' heads. The bases of the columns have a variety of mouldings. There are pointed double-chamfered arcade arches. At the west end is a triple-chamfered tower arch with semi-circular responds and water-leaf capitals. At the east end, the double-chamfered chancel arch has restored capitals. The two bay chapel/chancel arcade has hollow-chamfered arches and octagonal piers. The nave, north chapel and chancel each have a double hammerbeam roof, probably of late C17 date.

Other features of note include a reset early-Norman tympanum in the north wall of the nave; an early C14 monument under the chapel arch comprising a cross-legged knight with shield and a lion at the feet, C19 furnishings including pews; late C19 and early C20 stained glass windows, notably in the south arcade by Heaton, Butler and Bayne; a bronze sundial of 1718 with two 12 hour series in Roman numerals inscribed 'Thomas Ward fecit 1718', and set in an early stone stoup that stands on a later pedestal in the west corner of the north aisle.

SUBSIDIARY FEATURES: the remains of an early-medieval stone churchyard cross stands in the south of the churchyard. The shaft has been truncated. A vertical hollow has been cut in the cross-base, and was used in the medieval period to hold a chalice during Eucharist.

HISTORY: a Saxon church and churchyard may have stood on this site, although a church was not recorded at Domesday. St Michael's Church is of late C12 date, with notable C17 restoration following damage during the English Civil War. The church was further restored in 1865 by George Edmund Street, the notable High Victorian architect. Minor additions and modifications, including the insertion of a bell ringing platform in the tower, have taken place in the C20. In 1998, a Grade II designated sundial plate was removed from the churchyard and placed in the church, newly restored and attached to a 'stoup' or font and stone pedestal. The stoup is thought to have originally belonged to the church, but was recovered from nearby Shirlowe in 1890, and returned to St Michael's.

REASONS FOR DESIGNATION:
The Church of St Michael, High Ercall, Shropshire, a C12 church with later additions by G.E Street, and with remains of an early-medieval churchyard cross, is designated at Grade I for the following principal reasons:
* Rarity: Early-medieval churches are rare and most that survive, given their exceptional level of special interest, are designated at a higher grade.
* Architectural: The church is built using high quality early craftsmanship. The C17 work is of high quality and includes substantial hammerbeam roofs. Furthermore, there is sympathetic and modest restoration work by G.E Street.
* Historical: The church illustrates important aspects of the nation's social history as an early ecclesiastical building. Two principal phases of rebuilding also mark significant periods in history: the English Civil War; and the Victorian era of church restoration.
* Intactness: The church is largely intact.