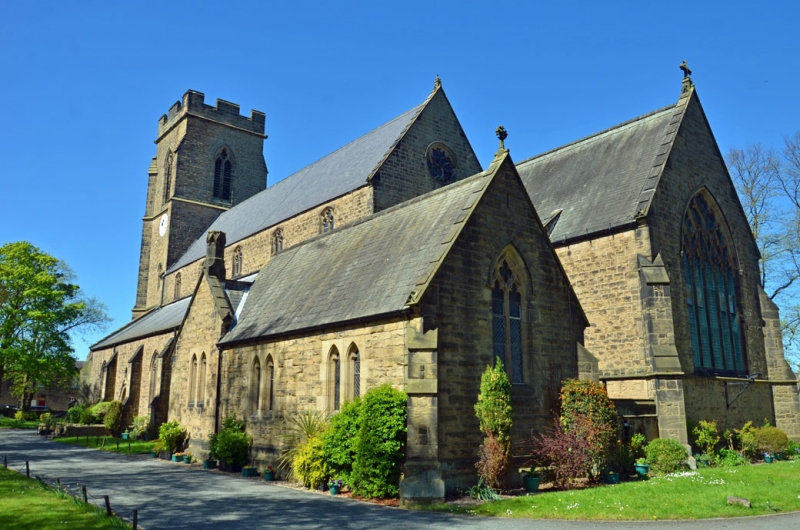 EXTERIOR: the church stands in an area of early C19 housing, and is situated in an attractive churchyard fringed with trees. The exterior is substantial and plain, in a Decorated style that is simple, but reasonably archaeologically correct. Large and tall west tower, as wide as the nave. Of four stages with diagonal buttresses, it has a C14-style west doorway of three chamfered orders, with a two light window above it. The third stage is very tall and has paired windows, and there are large Decorated-style bell openings in the upper stage. Blocky, embattled parapet. The aisles have two light windows with flowing tracery with buttresses between. The south porch has an outer doorway with a moulded arch on grouped shafts flanked by cinquefoil headed niches; there are trefoiled lancets in the side walls. Inside is an ambitious stone vault with foliate bosses on head corbels. The nave, aisle and chancel roofs are steeply pitched, without parapets, and the clerestory windows are a uniform two-light design. The chancel has diagonal buttresses and mostly paired lancet windows. The five-light east window has curvilinear tracery with good archaeological precedent. Above it, in the chancel east gable is a circular window with swirling tracery. The north chapel is shorter than the chancel and has paired lights in the north wall and a two-light east window. The south vestry and chapel are distinguished by a cross-gable on the vestry.

INTERIOR: like the exterior, the interior is in a Decorated style. The five bay north and south arcades are uniform and have quatrefoil, clustered piers and double chamfered arches, and the chancel arch is in a similar style. Tall tower arch. Both the north and south chancel chapels have arches to the aisles, and the chapels open to the chancel arches with labels with head stops on the inner faces. The nave windows have very deep, almost straight-sided, reveals. The nave has a timber vault, resting on short colonettes springing from head corbels, that was inserted c1865. The aisle roofs are boarded and have curved braces. The chancel roof is panelled, and has closely spaced arch braces on corbel heads.

PRINCIPAL FIXTURES: exceptionally fine east window of St Paul and St Barnabas preaching of 1856, inserted in memory of the third Duke of Northumberland: designed by the noted artist William Dyce (1806-64) and executed in Munich by Ainmüller. Octagonal stone font of 1846 with cusped tracery on the bowl and ball flower on the lower edge. The timber altar of 1846 has timber arcading along its front. Reredos and gothic-style sanctuary panelling with blind ogee arches of 1859. Octagonal oak pulpit with traceried panels, probably also 1846. Choir stalls with poppyheads and open traceried fronts. Altar rails with trefoil arcading. The fittings of the Lady Chapel, the reredos and stations of the cross were brought to the church when it became Roman Catholic. The monument of the third duke of Northumberland, d.1847 by J.E Carew shows the aristocrat, resplendent in his coronet, asleep; he is buried elsewhere.

HISTOR: St Paul's was built in 1845-46 to serve a growing residential district, and cost about £12,000. It was paid for mainly by the third Duke of Northumberland. The architect, Anthony Salvin (1799-1881) was a significant figure in the late Georgian and early Victorian Gothic Revival. Born in Worthing, he was a pupil of a little-known architect named John Paterson (d.1832) and worked in the office of John Nash. He set up in independent practice in 1828 and early on showed his ability to create buildings in an impressively authentic medieval style. He is also well known for a range of country house work, most notably his work on Alnwick castle, where he worked for the fourth Duke of Northumberland between 1854 and 1860. The east window, installed in 1856 as a memorial to the third duke, cost £1,639 5s, of which £816 2 1d was raised by public subscription. The rest was paid by the fourth Duke of Northumberland. The designer, William Dyce (1806-1864), was a very influential artist who also executed the cartoons for the historical wall paintings in the Houses of Parliament and the decoration on the east wall of All Saints, Margaret Street, London. There was further refurnishing in the chancel in memory of Edward Bryan, curate, who drowned while bathing at Alnmouth in 1859. The church became redundant in 1979, and was converted to the Roman Catholic use; some re-ordering has gone on in recent times.

REASONS FOR DESIGNATION
The church of St Paul, Alnwick, is designated at Grade II* for the following principal reasons:
* Parish church built 1845-6 in a Decorated style to designs by Salvin and funded by the third Duke of Northumberland
* Exceptionally fine east window designed by Dyce and made by Ainmüller of Munich, and a notable ducal tomb.
* It forms part of a contemporaneous development, showing the role of the third Duke in the expansion of the town, and his eagerness to provide spiritual welfare.