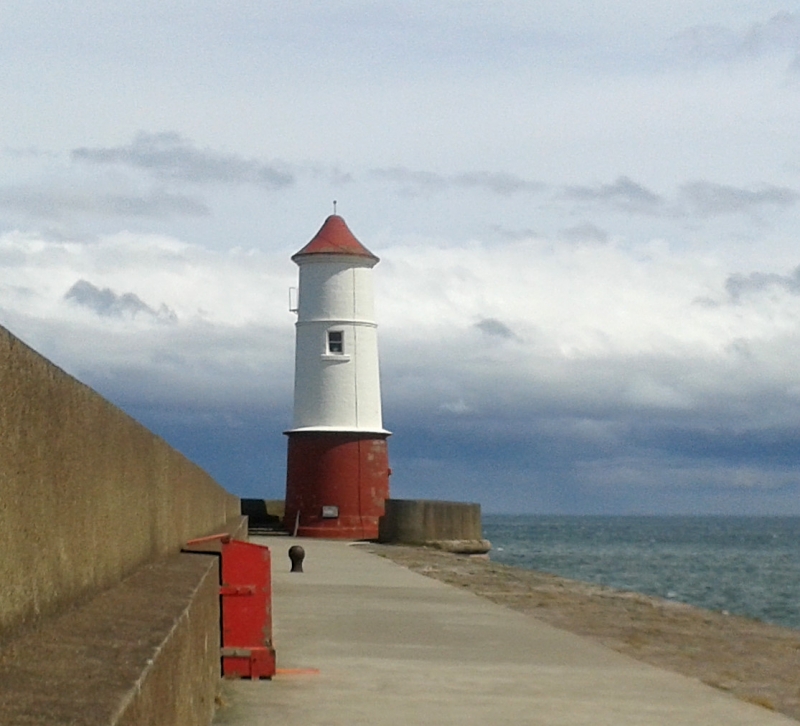 PLAN: the pier extends from the north side of the River Tweed into the harbour mouth for c. half a mile (880m) with a distinct change of angle half way along its length.

Rock-faced battered sandstone walls formed of large blocks of slightly convex squared stone. The outer face comprises six courses below a prominent roll-moulding, above which there is a vertical parapet or shelter wall three to four courses high. The latter is stepped on the inside. The stone surface of the pier is partly coated in asphalt concrete and concrete, but beyond the change of angle, the western edge retains the original stone surface with evidence of lewis holes. Along the length of the pier iron mooring features are set into its surface and at the landward end, there are two concrete anti-tank cubes. At the easternmost end of the pier, the shelter wall curves around to enclose an ashlar-built circular lighthouse, now painted; this is slightly tapering, and of three stages separated by projecting bands, with a conical roof. There is an entrance in the south side and a small recessed window opening in the western side; the seaward, eastern side has a large recessed window opening, and above this a glazed lantern with external gallery. Adjoining the inner face of the pier immediately before its change of angle, there is a roughly semi-circular flat-topped stone-built platform.

HISTORY
Berwick Harbour was transferred by Act of Parliament on 9th June 1808 from Berwick Corporation to The Berwick Harbour Commissioners with a brief which included the improvement of the harbour by the construction of a new pier on the Berwick side of the harbour to designs by John Rennie. Construction on the new pier began in 1808, in part on what is thought were the foundations of the Elizabethan pier. The foundation stone was laid on 27th February 1810 amid great celebration. Stone was derived from local quarries near Spittal and was shipped across from the south side of the Tweed to the pier workings. The pier was complete in 1825 and had cost £61,536. The foundation stone for a lighthouse at the end of the pier was laid on 15th February 1826, and the structure was completed later that year to designs of Joseph Nelson who had also been responsible for lights on Inner Farne (1809-10) and Longstone (1826). Other harbour works were completed but the much anticipated rise in the port's fortune did not occur. This is thought to be because of a mixture of increased harbour dues to pay for the works and the decline in the salmon catch, partly due to the size of the harbour mouth being reduced by the construction of the new pier, which discouraged salmon from entering.
The pier is depicted on all Ordnance Survey editions; the second edition of 1898 also depicts a semi-circular structure adjoining its inner side marked as 'Batt'; the date and function of this structure is unknown.

REASONS FOR DESIGNATION
This early C19 pier by John Rennie and lighthouse by Joseph Nelson are designated at Grade II for the following principal reasons:
* Designers: John Rennie is considered to be one of the two greatest civil engineers of the day and Joseph Nelson was a prolific designer for Trinity House; both have a number of listed examples to their name.
* Engineering: with a length of 880m, this pier is an impressive feat of early C19 engineering