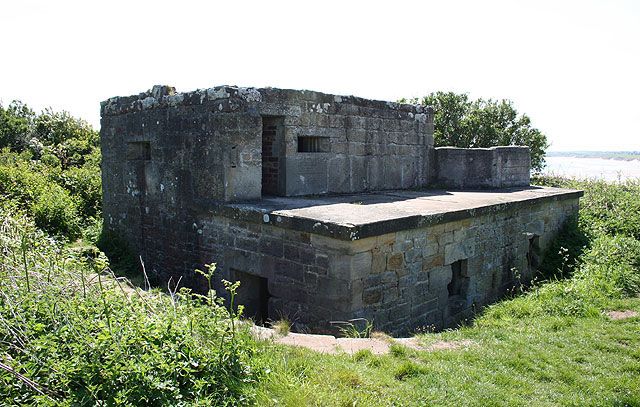 Battery, dated 1881, altered World War II. Large squared stone; cut dressings;
pillbox has concrete lintels and roof; brick lining to pillbox and magazine.
Irregular L-plan; sunk c.1.5 metres below ground level are a rectangular
chamber with smaller magazine alongside; above magazine is turret remodelled
as pillbox. North side shows flight of stone steps down to chamfered doorway,
with blocked loop to left, below higher pillbox with splayed loop. Lower
part to right of pillbox has roof of massive sandstone slabs. Right return
shows two square windows; pillbox above and behind shows low door and splayed
loop. To right of door inscribed tablet 'THIS BATTERY WAS ERECTED BY HIS
GRACE ALGERNON DUKE OF NORTHUMBERLAND K.G. FOR THE USE OF THE PERCY ARTILLERY
VOLUNTEERS COMPLETED 12TH MARCH 1881. Similar square window at rear. Left
return shows projecting pillbox with splayed loop in each face.

Interior: Rectangular chamber has corbelled-out course below ceiling and
L-plan hatch into magazine; chamfered doorways into lobby and magazine;
interior of magazine lined with later brickwork.