A Grade I Listed Building in Edlingham, Northumberland 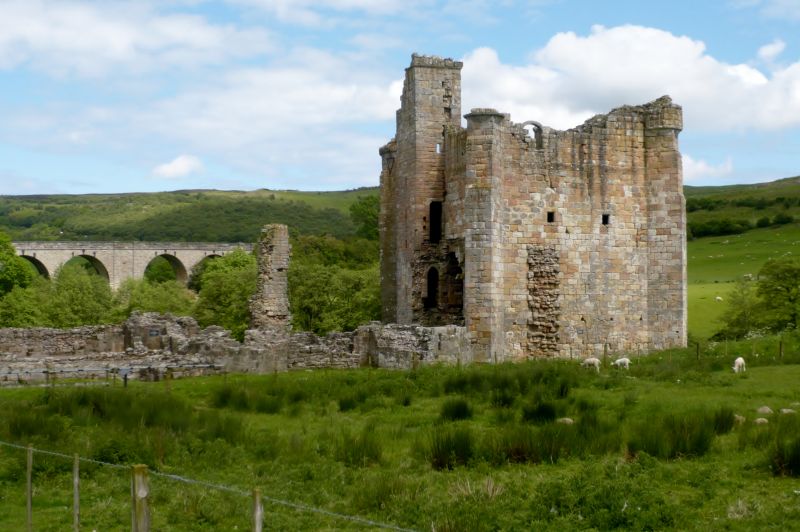 Church of England Parish: Whittingham and Edlingham with Bolton Chapel

Apart from the solar tower and a tall fragment of the south-east turret of the
hall house, the buildings are reduced to walls 1-2 metres high; the gates
passage has the chamfered jambs of 3 arches, the central with a portcullis
groove. The cobbled courtyard with its drains is well preserved.

The north and west walls of the solar tower stand to full height; at each
angle a large stepped diagonal buttress carrying a corbelled-out circular
bartizan, and in the centre of the north side a projecting rectangular stair
turret carried up above parapet height. Externally, the north wall shows
remains of pointed doorways from ground and 1st floors of lobby linking the
tower to the earlier hall house; further doorways and chamfered loops in the
turret. West wall shows 2 small square windows at 1st floor level. Interior:
ground-floor fireplace with an elaborately joggled lintel, garderobe, window
recess with seats and remains of segmental vault on chamfered ribs. lst-floor
Great Chamber shows remains of an elaborate fireplace, with joggled lintel on
head corbels, arched mural recess containing a well, double-level fenestration
(the larger lower windows with seats) and a lofty groined vault on head
corbels. 2nd-floor chamber has a simpler fireplace.

Historical notes: William Felton purchased the manor from Thomas de Edlingham
in 1295, and it remained the principal residence of his family until the early
C15. The Swinburnes acquired the estate in 1514 and it became their seat
until c.1630; the buildings were being pulled down in 1661.

The duplication of suites of private apartments between hall house and solar
tower is an interesting feature; historical evidence suggests division of the
castle between 2 autonomous households in 1402.