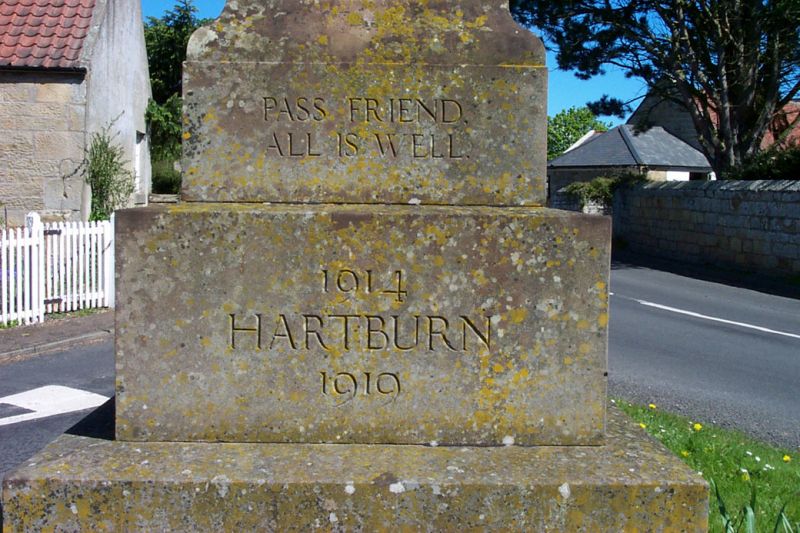 Hartburn’s war memorial stands on a small triangular green in the centre of the hamlet. It comprises a War Cross with deeply bevelled edges set on a chunky, two-stepped, base. On the south face of the base is inscribed PASS FRIEND ALL IS WELL/ 1914 HARTBURN 1919. On the north face is 1939 HARTBURN 1945.

Hartburn’s war memorial was paid for by Mr and Mrs Straker of the nearby Angerton Hall, for whom Lutyens and his long-time collaborator Gertrude Jekyll had designed the Hall’s gardens in 1904. It was built by HJ Robinson of Clay House, Meldon, and was unveiled on 31 July 1921 by Colonel EPA Riddell CMG DSO, the commander of the Northumberland Infantry Brigade.

Hartburn War Memorial is listed at Grade II for the following principle reasons:

* Historic interest: as an eloquent witness to the tragic impacts of world events on this community, and the sacrifices it made in the conflicts of the C20;

* Architect: by the nationally renowned architect Sir Edwin Landseer Lutyens (1869-1944), who designed extant 58 memorials at home and abroad including the Cenotaph in Whitehall;