The Royal Albion Hotel and Attached Walls and Piers and Railings 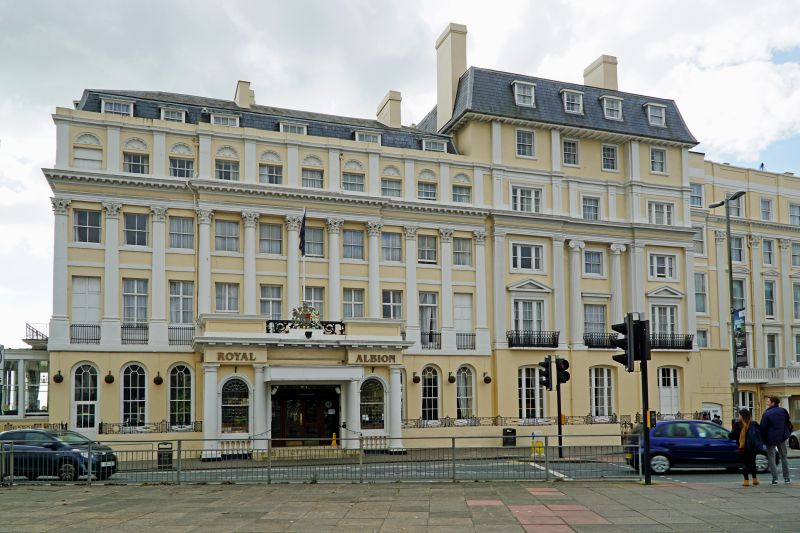 Entry Name: The Royal Albion Hotel and Attached Walls and Piers and Railings

Includes: The Royal Hotel and attached walls, piers and railings GRAND JUNCTION ROAD
Hotel. 1826; restored and extended in mid C19 and again in the early C20. Designed by Amon Henry Wilds for John Colbatch, the owner of the site. Stucco. Mansarded roofs of slate turnerised.
EXTERIOR: the north-facing elevation, which is the entrance elevation has a 10-window range. 3 storeys and attic with dormers over basement. Single-storey rectangular entrance porch in 4th- through 7th-window ranges; flat-arched entrance with a pair of attached Tuscan columns to either side; one Tuscan pilaster to each return. Windows to this porch are flat arched, those to front have jambs moulded as Tuscan pilasters and balustraded spandrels; entablature recedes over the entrance, above which are the Royal Arms, added in 1847 when the hotel received its Royal designation. All ground-floor windows are round arched. All upper floor windows are flat arched. Applied to first and second floors is a giant pilastrade of the Composite Order, the centre section, above the entrance porch, projects slightly and the pilasters become attached columns. Area between each pilaster's socle filled with cast-iron railings to floor-to-ceiling first-floor openings. Storey band between first and second floors, and sill band to second floor, neither of which interrupt the pilastrade. The attic storey articulated by pilasters on same axes as those below; each attic window topped by a round-arched tympanum filled with a shell motif.
The design of the main elevation repeated on the return only. 6 flat-arched dormers to main elevation and 4 to return. Projecting from the ground floor of the return elevation is a single storey structure, very likely of early C20 date, which wraps around the rear elevation as it follows the line of the street.
Included in this listing is the much higher mid C19 addition to the west: 3-window range; 3 storeys with 2 storey attic and dormers over basement. Segmental-arched openings to the ground floor. Above the centre range is recessed slightly. The giant order of the earlier block repeated here with some variation: the end ranges are framed by a pair of pilasters, which rebate back into the centre, recessed bay; the latter is treated as a distyle in antis with fluted attached columns of the Ionic, not Composite, order. Full entablature between second floor and first attic storey which is articulated by panelled pilasters; the second with its mansarded roof appears to be a C20 addition. All windows have architraves except for first-floor centre window which has a floating cornice only; all upper-floor windows are flat arched. The windows in the end bays are tripartite and are, on the first floor, topped by a pediment. Cast-iron railings to each first-floor window as in the main block. Both sections have an area enclosed by a parapet wall topped by a cast-iron railing both of which date to the early C20 as do ground-floor glazing bars. All these early C20 features are in a Regency Revival style. The French doors in the original block are of original design as are the attic sashes in window ranges 2 through 7 and ten; the remaining attic windows are blocked as is the first-floor window near the corner. The first-floor windows on the return also retain French doors of an original design; attic windows have sashes of original design in all but the first- and fifth-window ranges which are blocked. Stacks to party and rear walls.
INTERIOR not inspected.
HISTORICAL NOTE: on the site of the original block stood the 1753 house of Dr. Russell, whose book on the healthful effects of sea bathing helped to promote the development of Brighton as a resort. Following its demolition in 1823, the Town Commissioners offered to buy the site from Colbatch to maintain a clear view of the sea from the Old Steine. By 1826 the offer had not been taken up, and the construction of the current hotel began. The Albion was made the Royal Albion in 1847. In 1913 it was purchased by Harry Preston who owned the Royal York nearby (qv). There followed a period of popularity when the hotel was known for housing artistic and literary guests. There were minor renovations following sales of the building in 1978 and in 1987. It forms a group with the Royal York Buildings (qv).
(Carder T: The Enclopaedia of Brighton: Lewes: 1990-: 160).