The Parish Church of St Barnabas 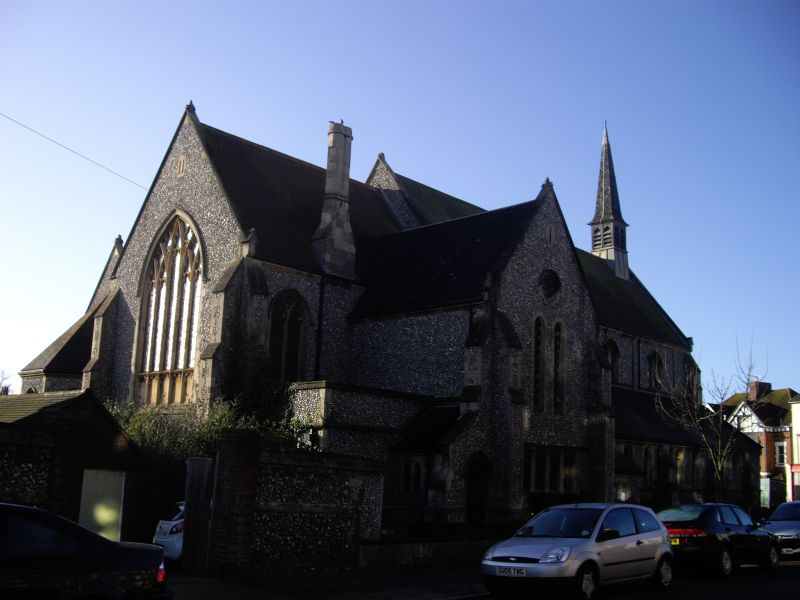 SEA ROAD (East side)
The Parish Church of St Barnabas

EXTERIOR: The church is built in a variety of later medieval styles. The nave of the original church has four bays, is tall and has a clerestory with two-light Y-tracery windows. The north aisle walls are relatively low and each bay is demarcated by buttresses with offsets. The west end of the have has a tall west window with a 1-2-1 configuration, the central pair of lights having cusped Y-tracery. Below this window is a lean-to narthex porch with a north entrance and small single-light windows in the west wall. On the north side of the chancel is a tall, cross-gabled organ chamber and to the east of this a single-story, flat-roofed vestry. The east window of the chancel is large and has five lights with a richly cusped and traceried head. At the west end a timber bellcote with double louvred openings straddles the roof ridge and is capped by a steeply pointed shingled spirelet. The Edwardian addition of the south aisle doubled the size of the church. It is under its own gable and has a spreading west window of five lights with Geometrical tracery. The south elevation is divided into bays by buttresses with offsets, each bay having a three-light window under depressed arches. The window in the easterly-most bay on the south side has a three-light window under a steeply pointed arch. At the east end of the aisle there is a three-sided apse with two-light windows and which forms a sanctuary for the south chapel.

INTERIOR: The interior walls are red brick-faced. The octagonal piers too are faced with red brick around a cement core. The sanctuary is laid with Rust's mosaic which was widely used for churches at the end of the C19. The nave is floored with pitch pine blocks.

PRINCIPAL FIXTURES: The fitting out of the south chapel (dedicated to All Souls) was undertaken by Leslie Moore in 1939. The body of the church has always been seated with chairs.

HISTORY: St Barnabas's church was built at the end of the C19 to provide more Anglican church accommodation in expanding Bexhill, and the parish was carved out of St Peter's. When the vicar there, Canon Leopold Stanley Clarke, retired in 1888 he gave £6000 towards a new church, the land for which was given by the 7th Earl de la Warre. Continued pressure on accommodation led to the addition of the large new south aisle in 1908-09.

The original church was designed by one of the most active and successful church architects of the Gothic revival, Arthur William Blomfield (1829-99) who was the fourth son of Bishop Charles J Blomfield of London (bishop 1828-56). He was articled to P.C. Hardwick and began independent practice in 1856 in London. His early work is characterised by a strong muscular quality and the use of structural polychrome often with continental influences. He became diocesan architect to Winchester, hence a large number of church-building commissions throughout the diocese. He was also architect to the Bank of England from 1883. Blomfield was knighted in 1889 and was awarded the RIBA's Royal Gold Medal in 1891. Sir Arthur's sons, Charles James (1862-1932) and Arthur Conran (1863-1935) joined their father in the practice. After his death they kept his name alive in the styling of the firm's name, Sir Arthur Blomfield and Sons.

REASONS FOR DESIGNATION:
The church of St Barnabas, Sea Road, Bexhill, is designated at Grade II for the following principal reasons:
* It is a late C19, flint-faced town church in the Gothic Revival style by one of the leading church architects of the period and which was expanded by his successor some twenty years later.