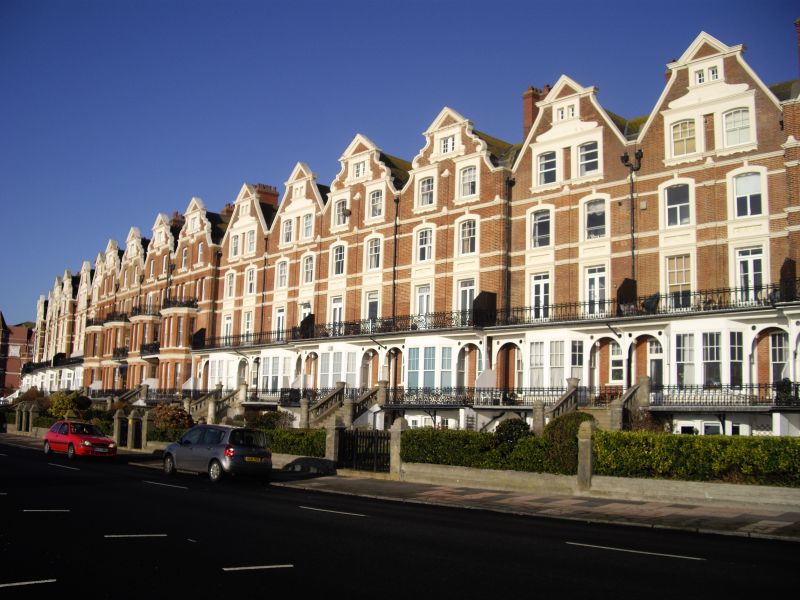 The following buildings shall be added to the list:

Flats C1895. Brick with detailing in stone and stucco or cement, tile-hanging
and tiled roofs. The terrace, which curves slightly away from the sea, reads as
a row of twenty vertical units, like town houses. The entrance fronts are in
Knole Road, but the sea fronts, facing the road known as the La Wan Parade, are
of equal if not greater importance. On the sea front each facade is two windows
wide and five storeys high over a half-basement, the top two storeys being in
the gable. The style here is a version of the Queen Anne style. The terrace as
a whole is symmetrical; there is a central group of four houses with three-
storey bays; on either side are eight houses which are grouped in pairs: the
houses recede and project in pairs, and alternate in pairs between shaped and
straight sided gables. There is a balcony all along the terrace at ground-floor
level from which shared flights of steps lead down to the gardens; a second
balcony runs at first floor level continuously except either side of the
westernmost three-storey bay. Boundary walls and piers to the front gardens
survive - but railings do not. Much small-scale alteration to windows, doors,
on this front, nos 5 and 7 being the most unaltered. In Knole Road the blocks
of flats have four storeys above a half basement, the main elevation being
treated as a shallow, gabled bay, one broad window wide, with tile-hanging and
single bargeboards. Each pair of houses is fronted and linked by a three storey
entrance wing; most of these, but not all, appear to have had originally two
entrances, one for each house. The style and detailing on this front is the
same for all twenty blocks and is a version of Domestic Revival style. Narrow
elevations to Middlesex Road and Brassey Road with stucco or cement ornament.