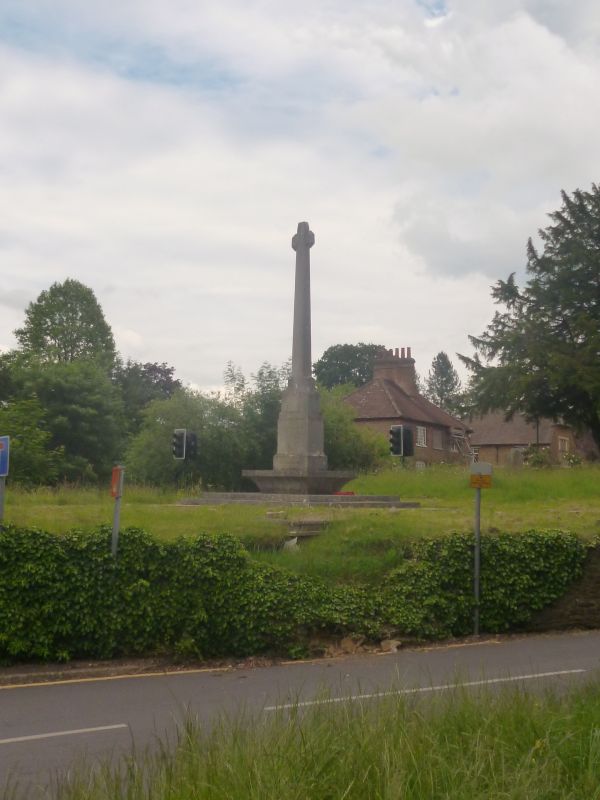 DESCRIPTION: the memorial comprises the war cross design by Sir Edwin Lutyens, a slender tapering cross c7m tall. The lozenge-sectioned shaft and short cross arms are linked to the base by stop chamfers and cyma moulding. The base consists of four stepped rectangular blocks of unequal heights standing on a square, undercut, plinth. That stands on a square platform of three low steps.

The principle inscription is incised into the largest block of the base and reads MCMXIV MCMXIX/ THEY COUNTED NOT/ THEIR LIVES DEAR/ UNTO THEMSELVES with MCMXXXIX MCMXXXXV added below. There is no roll of names of the Fallen (these are recorded on a plaque in the church).

The memorial stands in a prominent position in the north-west corner of the churchyard, overlooking the junction of Brighton Road and Hambledon Road.

The great wave of memorial building after the First World War resulted in thousands of commemorative monuments being raised both at home and on the battlefield. Sir Edwin Landseer Lutyens was the most outstanding designer to work in this field. This is one of 15 War Crosses designed by Lutyens, sharing a broadly similar design. The earliest to be erected was at Miserden, Gloucestershire, in 1920; the latest was at York, in 1925.

Busbridge War Memorial was unveiled on 23 July 1922 by Sir Charles Munro, Bart. It commemorates the servicemen from Busbridge who died fighting during both the First and also the Second World War, who are named on plaques in the church.

It can be assumed that the commission for the memorial came via the connection with the celebrated plantswoman, garden designer and artist Gertrude Jekyll (1843-1932), who lived at nearby Munstead Wood, a house designed for her by Lutyens. She was an early champion of Lutyens’s work and they designed many houses and gardens together, especially in the local area. Lutyens designed three memorials raised in the churchyard to members of the Jekyll family, Julia Jekyll (d1895); Francis McLaren (d1917); and the combined memorial to Gertrude Jekyll (d1932), Sir Herbert Jekyll (d1932) and Agnes Jekyll (d1937).

Sir Edwin Lutyens OM RA (1869-1944) was the leading English architect of his generation. Before the First World War his reputation rested on his country houses and his work at New Delhi, but during and after the war he became the pre-eminent architect for war memorials in England, France and the British Empire. While the Cenotaph in Whitehall (London) had the most influence on other war memorials, the Thiepval Arch (a memorial to the Somme at Thiepval, France) was the most influential on other forms of architecture. He designed the Stone of Remembrance which was placed in all Imperial War Graves Commission cemeteries and in some cemeteries in England, including some with which he was not otherwise associated.

Busbridge War Memorial, situated in the churchyard of the Church of St John the Baptist, is listed at Grade II* for the following principal reasons:
* Historic interest: as an eloquent witness to the tragic impacts of world events on this community, and the sacrifices it made in the conflicts of the C20;
* Architect: by the nationally renowned architect Sir Edwin Landseer Lutyens (1869-1944), who designed 58 memorials at home and abroad including the Cenotaph in Whitehall;
* Design quality: a simple yet elegant cross;
* Group value: with the Grade II*-listed Church of St John the Baptist with chancel screen by Lutyens (1899), and with the three memorials in the churchyard (all listed Grade II) designed by Lutyens, to members of the Jekyll family.