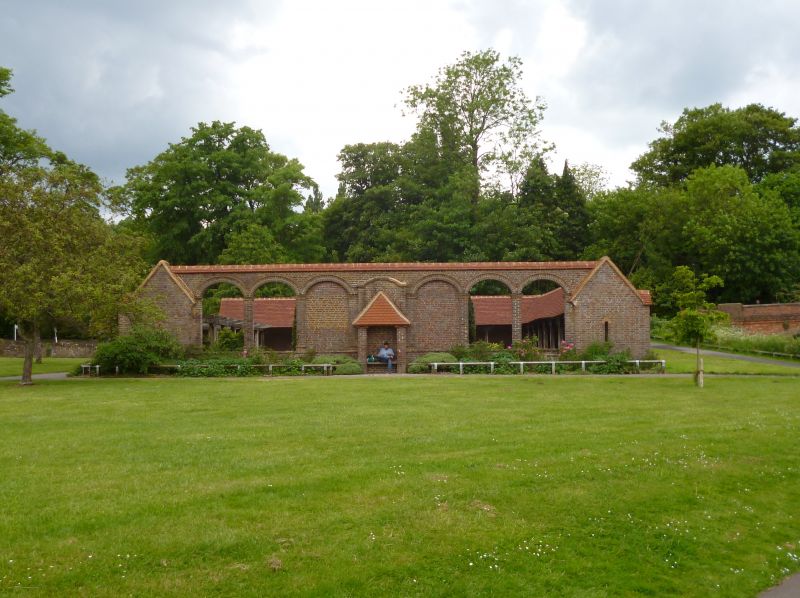 Memorial cloister. 1913 by H. Thackeray Turner, altered c1965 and 1986. Purplish brick in Flemish bond and timber; plain tile roofs. Rectangular on plan, having arcaded wall on east side; cloisters on north and west sides; and on south side open timber pergola of c1965 replacing former cloister (D Coombs, p.13). Exterior: west side: a flight of brick steps down to central archway which has tile jambs and cambered timber lintel; stepped dentilled eaves. North side: raking buttresses; stepped dentilled eaves. East side: 9 bays with 7-bay segmental-arched arcade having tile plinth, imposts and hoodmoulds; the 4 outer arches open, the 3 inner bays blind with central bench seat in tile-hung gabled porch and with raised segmental-headed panel over; outer bays (the ends of the cloister ranges) are gabled with round-arched vents; gabled tile coping. Interior: cloistered sides have timber posts supporting gabled roofs. East wall: central bay of arcade has commemorative ashlar plaque with recessed panel having decorative rose border and coat of arms at top, semicircular former fountain (now earth-filled) at base, and 4-step podium of stone setts below. The courtyard is paved with stone setts (laid in 8 sections) and has a raised octagonal pool in the centre. This was restored in 2012 during commemorations of the centenary of the sinking of the Titanic. The cloister was erected on the site of the old village animal pound in memory of J G Phillips of Godalming, who was chief wireless telegraphist on board the SS Titanic which sank in 1912. Phillips remained at his post, telegraphing for help, while the ship went down.
D Coombs, A Godalming Walk (1976), p.13. N Pevsner, The Buildings of England, Surrey (1971, 2nd edition), p.256.