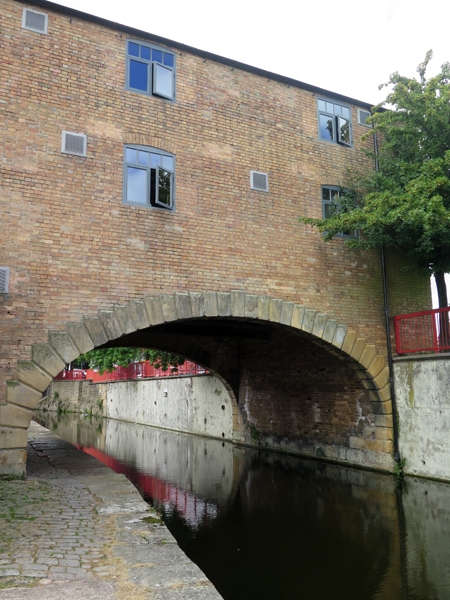 6/16 Depository at Canal Wharf
(Formerly listed under
10.4.75 Canal Road as Depository
on Chesterfield Canal)
G.V.
10.4.75 II*
Canal depository. Early C19. Brick with hipped slate roof,
ashlar dressings and stone hips. 3 storeys, 4 bays. Segmental
headed casements with shutters. Main west front has, to left,
elliptical canal arch with rusticated ashlar soffit, and to
right, elliptical arched doorway withkeystone and double-leaf
door, flanked by single casements. Above, to right, similar
doorway with metal hood on timber brackets, flanked to left by 3
and to right by single casements. Above again, 4 similar
casements. Right side wall has concrete stairs to first floor
elliptical headed doorway with ashlar surround, under C20 close
boarded canopy. Rear elevation has, to left, C19 lean-to
addition, coursed squared rubble, one storey, one bay, with
door to south, and to east, garage door flanked by single
casements and window with segmental heads. Above, 4 casements on
each floor. Interior has stables, and above, 4 cast iron
columns, remains of windlass, and kingpost roof with tenoned
purlins. There are numerous examples of Baltic marks on many of the cross beams throughout the building, the most common marks being the inscription: ‘KSXSV’ (‘KS’ usually referred to crown timber, i.e. the best quality, with SV probably relating to the place or Baltic port of origin, i.e. Sverige/Sweden).