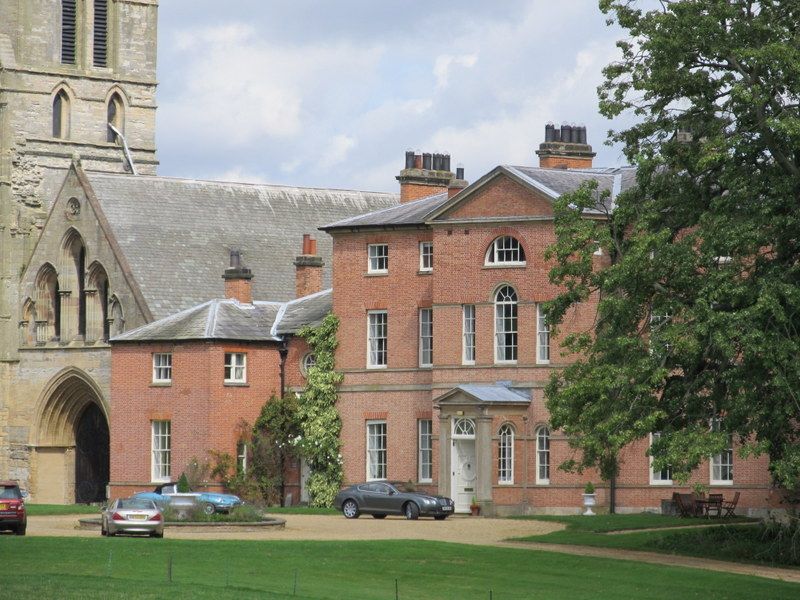 THURGARTON THURGARTON PRIORY
SK 64 NE DRIVE (east side)
4/104
Thurgarton Priory
7.8.52
G.V.
II*
House, now research centre for Boots plc. C13, 1777, C19, C20.
Red brick, ashlar dressings. 1777 house with hipped slate roof.
2 lateral and 2 ridge red brick stacks. Moulded cornice with a
moulded pediment to the single, central, projecting bay. Ashlar
plinth. Two and a half storeys, 5 bays with ground and first
floor sill bands and first floor band. Central projecting C19
closed porch with moulded pediment. Panelled door with
decorative glazing bar overlight flanked by single pilasters.
The side walls each have single arched sashes each with moulded
architrave and continuous impost and sill bands. Inner panelled
double door with fanlight. Either side are single arched glazing
bar sashes each with moulded architrave and continuous impost
band. To the right and left are 2 glazing bar sashes with flush
wedge brick lintels. Above is a single central, widely spaced,
Venetian style window. The central arched glazing bar sash with
moulded architrave and continuous impost bands. The flanking
single glazing bar sashes with flush wedge brick lintels. Either
side are 2 glazing bar sashes with flush wedge brick lintels.
Above, single central Diocletian glazing bar sash window. Either
side are 2 small glazing bar sashes, that immediately left being
a Yorkshire sash. All with flush wedge brick lintels. To the
left and right, slightly set back, are C19 red brick extensions
with hipped slate roofs, of one and a half storeys, 2 bays. The
left wing, built over the foundations of the south west tower of
the church, with 2 red brick stacks is set on an ashlar plinth
and has a moulded cornice. The right bay has a first floor band
and a ground floor sill band, the left bay projects and has a
continuous ground floor sill band. Single arched panel with
single arched sash with lateral glazing bars. To the left is a
single glazing bar sash. Above is a single oeil de boeuf with
decorative glazing bars and moulded surround. To the left is a
single small glazing bar sash. Both sashes in this bay with
flush wedge brick lintels. Attached to the left is the church,
listed as a separate item. The wing to the right corresponds,
however there is a single stack and in place of the arched sash
is a doorway with panelled door and fanlight. Projecting from
the right is a small C20 single storey red brick wing. Attached
to the right is a further red brick wing with hipped slate roof
and single red brick stack. Set ona brick plinth. One and a
half storeys, 4 bays. Single projecting bay topped with a brick
pediment having a single blind window. To the right, set back, is
a single similar blind window, and further right, set back, is a
single small casement. To the left, set back, is a single
glazing bar sash. In the pediment is a round arched opening with
moulded surround. Further right is a dressed coursed rubble
brick and slate, single storey, 2 bay wing, the right bay being lower with a
hipped roof and set over a stream, having 2 red brick arches with single central
brick cutwater. Rear of 1777 build has central two and a half storey projecting
polygonal single bay with 3 glazed double doors and overlights. Either side
are 2 glazing bar sashes. Above are 7 similar sashes. On the top floor, are
7 small glazing bar sashes. All openings with flush wedge brick lintels. To
the left and right are one and a half storey, 2 bay C19 wings. Set on ashlar
plinths with ground floor sill bands. The outer bays project. The left wing
with 2 glazing bar sashes and 2 similar sashes above. The right wing corresponds,
however the inner bay has a slightly projecting single storey porch with arched
glazing bar door, flanked by single fixed lights. Door and lights are flanked
by single pilasters rising from the sill. Above is a parapet. All windows
have flush wedge brick lintels. Further right is the church. To the left,
set back, is a later 2 storey, 4 bay wing with doorways and glazing bar sashes
and further left a single storey 5 bay wing with altered openings. Interior.
C13 undercroft of the west range of the cloister comprising 5 bays in a double
width with circular columns and moulded capitals to the arcade and quadripartite
vaulting. Dogleg staircase with stick balusters, carved tread ends and decorated
cornice. 2 contemporary decorative fireplaces, one of marble and wood, the
other of marble with blue John inlay, this room also has decorative cornice
with dado, ceiling, chair rail with panelling under and doorcases. Built on
the site or a monastery founded c.1119-39 by Ralph de Ayncourt for canons of
the order of St Augustine. Dissolved 1534. Acquired 1539 by William Cooper
who reconstructed the remains as a house. 1643 fortified for Charles I. 1777
largely rebuilt for John Gilbert Cooper. 1884-1904 used as a Palace by the
first Bishop of Southwell.